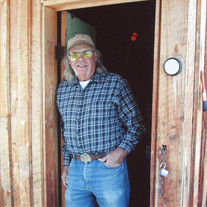 Almost everyone knows someone named Bill Johnson, but not everyone knew William Fredrick Johnson who was somewhat of a legend among those who knew and loved him for a variety of reasons. Our Bill Johnson was born on October 23, 1936 to Frank and Lena (Fairbanks) Johnson in Mahnomen, MN, joining six older siblings. At age 12, Bill was orphaned and left to his own devices, making it to school only “quite by accident”. As the age of 18, Bill hitchhiked to Montana to work on a ranch in Lambert and was soon joined by his wife, Joan Humbert. Together the couple had four children; Kathy, Peggy, Carole and Billy. They spent several years in Glasgow where Bill was employed as a sheet metal worker. In 1964, the family moved to Dillon. Bill worked many years in the sheet metal industry before becoming an independent Lennox dealer. In addition Bill played music and had an outfitting business, both of which he was passionate about. In spite of a lack of education in his formative years, Bill did obtain a Bachelor’s Degree in Industrial Arts from Western Montana College in Dillion. In 1978, Bill united with Cheryl Birdsill Haggard and her daughter Cindy. Together Bill and Cheryl entertained many with music from “The Cowboy and the Lady”. The duo was very compatible and enjoyed anything that involved animals and being outside. Always ready for action, there was never a dull moment when Bill was around. He loved the outdoors, hunting, fishing, and going to his cabin at Bloody Dick. He loved team-driving with his mule Bernard (who had never been cussed at as he was acquired from a pastor in Missouri). Bill was an avid reader, quick-witted and always ready to bestow his knowledge on his children and grandchildren. His great love of music, cowboy ways, and sense of humor are carried on in various family members in sometimes surprising and unpredictable ways. Bill was an enrolled member of the White Earth Indian Reservation as a Chippewa and was proud of his Native American heritage. He enjoyed traveling to Minnesota on a regular basis to re-connect with family and friends of yesteryear. One could never expect that he would behave himself on those trips, and he typically had no schedule. In Bill’s final days, Cheryl took him for daily rides along various country sides. Both Cheryl and Cindy provided for Bill’s care with immeasurable love and compassion. Nothing was too much for them when it came to providing care for him. Bill passed away at Barrett Memorial Hospital on Monday, March 28, 2016 from complications of advanced stages of PICS disease. He was preceded in death by his parents, six siblings Bud, Swede, John, Lonne, Carl, and Carol Bemment: Survivors include his wife, Cheryl, children Kathy(Ken) Smith, Peggy (Rick) Clark, Carole Johnson Diede, Billy (Darcy) Johnson, and Cindy Johnson.; Grandchildren Jim (Kathrine) Johnson, Kyler Smith, Kailey Smith, Colby Diede, Carly (Kaleb) Andrews, Jake Johnson, Jordan Johnson and Vini Selway; 4 great-grandchildren; his brother Marvin , in-laws Jim and Wannetta Birdsill, Dan and Mary Birdsill and Marilyn and Jesse Ramirez, numerous nieces and nephews and his beloved dog Jack. Funeral services will be on Saturday April 2, 2016 at 3:00 pm at the Brundage Funeral Chapel. Memorials may be sent to Humane Society of Beaverhead County, 34 Lagoon Ln, Dillon, MT 59725 or a charity of the donor’s choice.

Almost everyone knows someone named Bill Johnson, but not everyone knew William Fredrick Johnson who was somewhat of a legend among those who knew and loved him for a variety of reasons. Our Bill Johnson was born on October 23, 1936 to Frank... View Obituary & Service Information

The family of William Fredrick Johnson created this Life Tributes page to make it easy to share your memories.

Almost everyone knows someone named Bill Johnson, but not everyone...