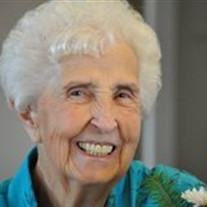 Voris Carson Blomquist January 24, 1923 to December 15, 2014 Voris Carson Blomquist left this earthly sphere on December 15, 2014, and returned to her Heavenly Father, her dear Emmett, and other loved ones who have passed on before.  She was born in Shelley, Idaho, on January 24, 1923.  Voris was the second of five children born to Edgar and Carrie Mitchell Carson:  Beth, Voris, Callie, Nola, and Val.  Voris married Emmett Blomquist on August 21, 1940, in Shelley, Idaho.  They were later sealed in the Idaho Falls LDS temple.   Voris graduated from high school in Hamer, Idaho.  She was recognized for her excellence in typing (keyboarding) and penmanship. Voris and Emmett moved to Dillon, Montana, in 1941 and lived on a ranch north of Dillon.  Emmett built them a log house just north of the Nelson Lane.  They later moved to a bigger ranch several miles further north.  (That ranch is now owned by Jim Sitz.)   Voris was a hard-working rancherâ€™s wife.  She cooked three big meals a day for her family and the hired ranch hands.  Momâ€™s cinnamon rolls, chocolate chip cookies, pies, and fried chicken were family favorites.   Emmett and Voris were very dedicated to the cattle business.  They raised registered Herefords and later switched to registered Simmentals.  Mom was dadâ€™s â€œright-hand man.â€  She supported dad in all aspects of the cattle business and everything else he did.  Wherever dad went, mom was right beside him.  They became known as â€œMama and Papa Bâ€ among their rancher friends and many others.   Mom enjoyed making quilts and made them for all her children and grandchildren and for most of her great grandchildren.  She loved red roses. She was a loving, caring person.  She taught all her children to be kind, to be honest, and to work hard and do their best. Voris is survived by her five children:  Keith (Kathy) Blomquist, Rock Springs, WY; Helen (Wayne) Norman, Logan, UT; Bonnie (David) Beck, Kuna, ID; Don (Linda) Blomquist, Dillon, MT; Kevin (Cheri) Blomquist, Twin Falls, ID; as well as her 19 grandchildren and 51 great grandchildren. Funeral services for Voris will be Saturday, December 20, 2014, at 10 a.m., at the L.D.S. Church in Dillon, Montana.  A viewing will be held Friday evening from 6:00-7:30 p.m. at Brundage Funeral Home and Saturday 8:45-9:45 a.m. at the church. $(document).ready(function(){ });

The family of Voris (Carson) Blomquist created this Life Tributes page to make it easy to share your memories.

Send flowers to the Blomquist family.