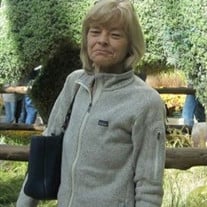 Terry Lou Rath, mother, wife, sister,and friend was born June 18 1951 in Deer Lodge Montana.  Her parents June and Ervin Rath were proud of the blue eyed blond haired beauty.  This was the start of a very eventful life.   Early on she learned from older sister Sheryn Kittel and Karen Kester she was not the boss.  Several sisters followed after Terry's birth:  Lorrie Rutledge, LaVonne "Kay" Trogden, and Melody Rath.  This family of six girls proved to be a formidable group when called upon. In the beginning it looked as if Terry would choose a career in watch repair.  At age 3 with the help of Karen they removed the back of their mother's watch and proceeded to put clay in the working movement of the watch.  There was a dark cloud that day.  Terry and Karen continued to seek out careers and interesting adventures.  Terry was always the one with the "bright" ideas and the others would provide the muscle. Anyone who knew Terry recognized her as a hard worker, but did you know that she worked for the Ravalli County Sheriff's office at night as a dispatcher.  She was just 17 and in her senior year of high school.  She loved that job. Son Joseph 'Joe' Rath was born September 10, 1969.  From this day forward Joe was the driving force in Terry's life.  While taking care of the new baby she attended the University of Montana.   Later decided that life skills would serve Joe and her better.  So they moved on to real life. Terry worked as a book keeper, bee keeper's helper, managed her parents bar, and ran a lumber yard until moving to Dillon.  It was this move that began another chapter in her life.   In 1989 she met Guy Terrill and they started their life together.  As a couple they worked side by side developing the spraying business and other business adventures.  They worked hard together but shared other interests; riding snowmobiles, airplane camping in the the back country, trips to friends and relatives, and gardening. Sheryn Kittle, Terry's older sister, moved to Dillon for her job.  This gave these two time to talked about all of the mean things Karen and Terry had done to Sheryn during her baby sitting times with the girls.  Terry liked having Sheryn around to visit with and have family close. In 1996 Terry was diagnosed with cervical cancer.  Her sister Kay Trogden was her support and provided the sisterly love and attention that was needed to get her through this time.  This battle never ended due to serious complications from the original treatment.  She fought the good fight until Sunday, February 22, 2015.  When Terry was diagnosed she commented that "she was a tough old broad".  Terry proved that time and again until the very end. Terry took on the job of guardian for her nephew Cody Trodgen when in a two year time span Kay and Spence passed away.  This labor of loved required that she move forward with her life and the cancer ailments were put aside. She guided Cody through high school and on through college. Aunt Lorraine became the next project for Terry and sister Lorrie Rutledge.  They tried to care for her in her advancing years.  This proved to be harder than anticipated.  Aunt Lorraine looked on this adventure as a need to care for these two nieces of hers.  Terry never gave up trying to look after her Aunt Lorraine. Terry liked nothing better than to look after her baby sister Melody.  She adopted the role of mother, sister, and friend when our mother passed away.  It has been this way until the day of her passing.  One  surprise that everyone still talks about was when Terry took Melody to Las Vegas for her birthday.  It wasn't just any trip.  Terry had arranged for Melody to go to NASCAR school and drive a real NASCAR around the track.  Terry was so excited that Melody  was able to do something she had dreamed about.   Lots of hugs and tears on this trip. Her son Joe drug home many pals who Terry thought of as sons and one very special woman who she loved like her own daughter.  The boys will miss her quick wit and unquestioning support. For those of you who did not know Terry you missed the kindest, caring, giving, genuinely funny and most grateful woman.  She loved animals and never saw a stray that didn't get a invite to move in with Guy and her.  Terry loved flowers but she can't  use them now so make a donation to the Beaverhead Animal Shelter in her memory.  She will be missed by Joe, Tina, Guy, sisters; Sheryn, Karen, and Melody, not to mention nieces, nephews and friends. Terry was proceeded in death by her parents June and Ervin Rath; sisters Lorrie Rutledge and Kay Trogden; brother in law Spence Trogden; Aunts Lorraine Burns and Ethel Scribner, Uncle Lou Wardein; and maternal and fraternal grandparents. March 14th, 2015 her family and friends will gather to share more stories and talk about the "tough old broad."  Come by the Terrill's on March 14th from 11:00 till 2:00 for some pot luck and lets talk. $(document).ready(function(){ });

Terry Lou Rath, mother, wife, sister,and friend was born June 18 1951 in Deer Lodge Montana.  Her parents June and Ervin Rath were proud of the blue eyed blond haired beauty.  This was the start of a very eventful life.   Early on she learned... View Obituary & Service Information

The family of Terry Lou (Rath) Terrill created this Life Tributes page to make it easy to share your memories.