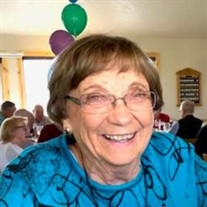 Ruby June Harvey 1938-2021 Ruby June Harvey, 82, passed away at home surrounded by family after a brief illness. Ruby was born June 18, 1938, in Oakland, Maryland to Dewey and Sadie Gnegy. She was the youngest of eight children. In high school she met her life long companion and the love of her life Ernest Harvey from Red House, Maryland. They dated several years and married on September 8, 1957. In 1960 Ruby and Ernie packed everything they owned leaving Maryland on an adventure together moving to Dillon, Montana joining Ernie’s brothers: Calvin and Marshall. Ruby worked as a bookkeeper at the Ford dealership and later worked with Ernie doing the bookkeeping for Harvey Brothers construction. Over time Ruby and Ernie had rental properties and storage units. Ruby continued to manage rentals with the help of her son, Jim. Ruby was a dedicated mother first and foremost. She brought so much joy to people through her kindness and generosity. Ruby never let on if she was having a bad day and was always up for anything. A friend of hers said this quote by Emory Austin personified Ruby: “Some days there won’t be a song in your heart. Sing anyway”. Ruby loved to cook for family and friends, and she had a passion for bridge, sharing puzzles, water aerobics, going to coffee or lunch all in the spirit of spending time with her wonderful loyal friends. She especially enjoyed time with the grandchildren: Bradley, Joel, and Jacob and enjoyed her activities with the boys and watched them grow into nice young men. Ruby is survived and will be sorely missed by her two children: Nancy Harvey ( son-in-law Matt Alton) and Jim Harvey ( daughter-in-law Dawn). Ruby had four brothers and three sisters and is survived by her brother Lorraine Gnegy of Oakland, Maryland and is also survived by many nieces and nephews. Ruby in her final wishes wants a small memorial for her to be held at a later date. She wants her ashes to be placed with Ernies at the Mountian View Cemetery in Dillon. Ernie has never left her side and they will spend eternity together. Ruby had wonderful memories of her 80th birthday party and wanted that to be her final celebration. Ruby celebrated life each and every day and would want others to continue in the celebration of her life as she enters her eternal home. Memorial contributions can be made to the Grace United Methodist Church in Dillon or to the Dillon Concert Association.

Ruby June Harvey 1938-2021 Ruby June Harvey, 82, passed away at home surrounded by family after a brief illness. Ruby was born June 18, 1938, in Oakland, Maryland to Dewey and Sadie Gnegy. She was the youngest of eight children. In high... View Obituary & Service Information

The family of Ruby June Harvey created this Life Tributes page to make it easy to share your memories.

Send flowers to the Harvey family.