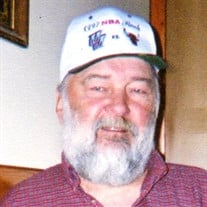 Raymond S Ford, 76 Raymond Stanley Ford passed away at his home on April 19, 2018 of natural causes. He was born in Spokane, WA to Robert D. and Helen L. (Thurber) Ford on December 2, 1941. He had many childhood adventures growing up number 7 out of 12 children. He attended schools in Spokane. Ray married Joann Garratt in 1960 and had two sons; Timmy Ray and Stan Lee. They later divorced, and Ray moved to Montana where he was employed as a commercial painter. In 1965, while painting the Metlen Hotel in Dillon, Ray met and married Rose Marie Hartman. He became step-father to her son Dennis Delano. The family traveled throughout Idaho and Montana for his job. After settling down in Hamilton, MT, they had a daughter, Paulette Marie. In 1969, the family moved to Dillon and Ray later started working for F.H. Stoltze Land and Lumber as an electrician until they closed in 1990. He and Rose divorced in 1980. He married Sharon Nice in 1981. He became step-father to her children; Scott and Kym. Ray and Sharon later divorced. In 1993, Ray worked for NutraCea until his retirement in 2007. Ray enjoyed camping, hunting, fishing, going for drives where he would end up in Melrose and Glen. He was an avid bowler. He was in a bowling and pool league for many years. He would drive to Spokane as much as possible to see his family. They would have amazing reunions with many late-night poker games. He and his siblings enjoyed going to the casino to play. Ray was preceded in death by his parents; son, Timmy Ray; brothers, John “Jack”, Richard “Dick”, Eugene “Gene”; brothers-in-law, Robert Beckham, Arthur Miller and Raymond Olson; sisters-in-law, Janine and Beverly Ford; nephews, Russ Ford, Greg Beckham and Bruce Ford; ex-wife, Joann Breeding; and special friend, Phyllis Hoerster. Ray is survived by his children; Stan “Willy” (Margaret) and Paulette (Troy) Canfield, his step-children; brothers and sisters, Dolores Olson, June Miller, Robert, Doy (Hazel), Marge Beckham, Helen (Bob) Veitenheimer, Charles (Becky), David (Debra); sisters-in-law, Dolly and Donna; grandchildren, Torin Ford, Vanessa and Melissa Ford, Dan Delano, Hillary and Heath Patterson, JT and Tyler Cornish, Kyle, Christian and Joel Canfield; great-grandchildren, Joseph and Izaiah Ford and Layne Patterson; the family of special friend, Phyllis Hoerster; many cousins, nieces and nephews; and friends too numerous to mention. He will be missed by all who loved him. Cremation has taken place. A potluck celebration of Ray’s life will be held at The Office Bar at 1 PM on Saturday, May 5th…bring your favorite dish to share. A family celebration will be held in Spokane later this summer.

Raymond S Ford, 76 Raymond Stanley Ford passed away at his home on April 19, 2018 of natural causes. He was born in Spokane, WA to Robert D. and Helen L. (Thurber) Ford on December 2, 1941. He had many childhood adventures growing up number... View Obituary & Service Information

The family of Raymond Stanley Ford created this Life Tributes page to make it easy to share your memories.

Send flowers to the Ford family.