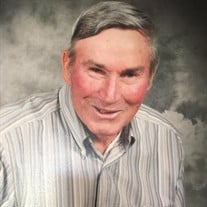 Peter Gordon Miller died on April 22, 2017, at his home in Dillon. He was 79 years old. He was born December 3, 1937, in Dillon, to George Walter Miller and Mary Katherine White Miller. His very early years were lived in Denver, Colorado, and Fremont, Nebraska. When he was about 4 or 5 years old, the family moved back to Dillon and Dillon was his home for the rest of his life. Gordon graduated from Beaverhead County High School in 1956, and in June, 1959, he married Irene Eugenia Whitney. They were married 58 years and had five children: Beverly, Michael, David, Christine and Kimberly. Gordon was known for his work ethic, the high quality of his work, honesty, patriotism, generosity, and kindness. Gordon worked in the construction and building trades for most of his life beginning with his father, George, and continuing with his brothers, Bob and Marvin, his nephew, George, and sons, Mike and Dave. He actively operated his own business, Gordon Miller Construction until 2011. He had been using a backhoe since he was about 16 years old and his current backhoe was his “baby”. He and Irene ran the Sacajawea Motel from 1971 to 1978. This motel is where their children learned their work ethics. After they got out of the motel business, Irene wanted to start a restaurant, so all the Miller men worked to build “The Cozy Corners Restaurant”. Gordon was the best fry cook ever had at that restaurant. The Cozy Corners Restaurant operated from the early 1980s until 1986, at which time Gordon and Irene became somewhat nomadic and went to California where Gordon worked construction with Dave for a few months each year. They also traveled to Idaho, Arizona and Washington to visit Dave, Chris, Kim and Bev. Gordon loved old cars and motor cycles. He had a Harley and a Honda Gold Wing. He has owned several old cars and a paddy wagon all of which he restored and was proud of. Gordon was preceded in death by brothers Robert, Jim, and Jack Miller, sisters Marion Smith, Joan Schiable, Jean Hubock and Jane Gates and great grandson Robert Sean Adrian Cruz Beasley. Gordon is survived by his brother Marvin (Pat) Miller, wife, Irene, brother in law Jack Smith and children, Beverly (Evan E.) Huntsman, Mike Miller, Dave Miller and Bonnie Rebish, Christine (Doug Lesperance) Miller, Kim (Casey Wolf) Miller and Kelly Miller. His grandchildren are Aubrey (Brian) Zapanta, Levi (Jessica) Dahl, Luke Dahl, Candice Dahl, Cheryl (Paul) Zimmerman, Evan Z. Huntsman, Peter B. Huntsman, Trey Bock, Nicolas Miller, Alex Miller, Kendra Lesperance, Michael Lesperance, James Lesperance, Scott Lesperance and Cameron Wolf. He is also survived by 10 great-grandchildren, Tyler, Madison, Luke, Miller, Clark, Breann, Dyllon, LaRae, Keith, Kaylee, Riley, Madison, Ethan and Autumn Grace is on the way, along with many beloved nieces and nephews. Special thanks to Kathy & Dave Drew and Marcus & Cassie Drew and the staff at Sparkies, Barrett Hospital and Health Care and Marie Holt, Gena Miller and Deb Hursch, the hospice ladies, Jerrilynn Roberts, the American Legion, Dr. Sandra McIntyre and Laurie Dallasera and all others who showed caring and support for Gordon’s family. Memorial contributions can be made in Gordon’s name to The American Legion.

Peter Gordon Miller died on April 22, 2017, at his home in Dillon. He was 79 years old. He was born December 3, 1937, in Dillon, to George Walter Miller and Mary Katherine White Miller. His very early years were lived in Denver, Colorado, and... View Obituary & Service Information

The family of Peter Gordon Miller created this Life Tributes page to make it easy to share your memories.

Send flowers to the Miller family.