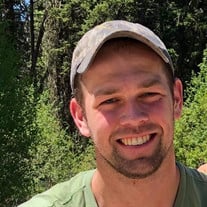 Nathan Edwin Scott April 22, 1997 - October 2, 2021 Nathan Edwin Scott was born in Walnut Creek, CA and raised in the East Bay of Northern California on the edge of the San Joaquin Valley and the California Delta. As a youth, Nathan found his niche in music and the outdoors. He played percussion instruments in his high school jazz band for four years, learning to both read and write music. At the same time, Nathan excelled academically throughout high school being an Honor Roll student in his college-prep courses for eight consecutive semesters. But it was his love for outdoor adventures that framed his life. Nathan became a Cub Scout when he was nine and by his twelfth birthday had earned the Order of the Arrow; the highest award in Cub Scouting. After transitioning to Boy Scouts his efforts and success increased as he earned 27 merit badges, completed a 50-mile backpacking trip, took on leadership positions and became an Eagle Scout, the highest rank in Scouting. Beyond Scouting, Nathan found great pleasure in fishing and hunting adventures, and once again found tremendous success. For him, it was the entire experience from planning and scouting, time in the field, then enjoying the harvest with family and friends. His enthusiasm was contagious as he introduced numerous friends to the outdoor life. Moreover, his passion extended to writing as he became a published author at sixteen when the California Waterfowl Association published his essay, Five Years of Youth Hunts, in the Winter 2013 edition of their magazine. After high school Nathan decided that his future was in Montana. So, he moved to Bozeman and enrolled at Montana State University. This was a wise decision as Montana and Nathan became a perfect fit. His love of adventure and the outdoors could find expression in Big Sky Country. For Nathan’s adventurous spirit it was always the next stream, the next trail, the next mountain, the next valley. He leaves behind so many who cared for him and loved him. They will never forget his beautiful smile and beautiful soul.

Nathan Edwin Scott April 22, 1997 - October 2, 2021 Nathan Edwin Scott was born in Walnut Creek, CA and raised in the East Bay of Northern California on the edge of the San Joaquin Valley and the California Delta. As a youth, Nathan found... View Obituary & Service Information

The family of Nathan Edwin Scott created this Life Tributes page to make it easy to share your memories.

Send flowers to the Scott family.