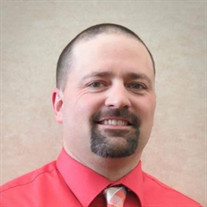 Michael James Rice May 2, 1978 – April 25, 2021 Michael James “Mike” Rice left this earth too soon in a boating accident on April 25 th . He was born on May 2, 1978 to Tom and Sharon Rice in Dillon, MT. He joined his brother Nolan, who became his lifelong best friend and confidant. Mike grew up on the family ranch/farm in Dillon, MT where he learned the value of a hard day’s work from a young age. He believed in getting his hands dirty and working until his body hurt. He always said, “Put me to work!” Mike and Nolan always spoke of moving pipe before and after school for their dad and neighbors. There was also the annual Mother’s Day ditch cleaning followed by T-bone steaks (rare) at the Buffalo Lodge. He attended schools in Dillon. Mike played the drums in junior high band and like anything he ever tried, he excelled. He played football and ran in track during high school. He graduated in 1996. He later attended and graduated top of his class majoring in autobody and a minor in business from WyoTech in 2002. He also became a certified welder during his schooling. Mike moved his family to Helena in late 2002, where he started as a body man at Collision Pro and proved his amazing ability to fix cars perfectly. In July 2008, he went to work for Mountain West Farm Bureau. There he studied hard and earned many certificates moving up the ladder. He most recently became the District Claims Manager. Until the day he left us, he was up at dawn to work and awake later than most in order to get it all done. Mike was tireless and his creative mind never slowed down in an effort to make the world better for everyone in it. In February 2000, Jacob Collins was born, and Mike received his greatest title of his life: Dad. Being a dad came naturally to him and because he was so great at it, Madison Marie joined the family in June 2003. Mike’s kids were the reason he lived, worked so hard, and busted his butt to be the best he could be for them. He attended all their activities and bragged about their accomplishments with so much pride. Mike was so proud of his amazing kids. He will continue to watch over them even though he’s gone because he wouldn’t let any distance keep him away from the important events awaiting in their futures. You could say that Mike came out of the womb talking because wherever he went, he was always making conversation with strangers, telling stories, or just talking with family and friends. There was never a dull moment when Mike was at a gathering and started telling stories of his past, especially those moments he’d shared with his buddies. As an adult, he loved to get a rise out of his mom with old stories of his shenanigans. Family gatherings were always fun with Mike around because his energy, laughter, and smile could light up a room. Mike loved the outdoors, beginning downhill skiing in Dillon JCs Little Skier program at an early age. He enjoyed working in his yard, throwing barbeques, and boating. Along with his gift of gab, Mike loved deeply and wore his heart on his sleeve. He prided himself in discreetly picking up the tab for seniors at local bars and restaurants. He also loved buying gifts for those in need from the Giving Tree during the holidays. He most recently met his true love, Tracie, who filled the missing piece of his life. Mike’s untimely passing will forever shape his families and friends lives because of the depth of the hole he leaves behind. Those who loved him will strive to continue his legacy even though we know his shoes will never be filled. On those days where the hole seems a bit too big, please make sure to tip one back in his honor. Mike was preceded in death by his great-grandparents Cliff and Bertha Cerney; grandparents Gene and Mary Jane Rice and Jim and Marie Rebich; aunts Merry Lunde and Shirley Cooper; and uncle Arlie Cooper. Mike is survived by his children Jacob “Jake” Rice and Madison “Madi” Rice of Helena; parents, Tom and Sharon Rice of Dillon; brother Nolan Rice of Filer, ID; fiancé Tracie Dahl of Helena; aunts and uncles Kim (Bill) Susag and Gary Lunde of Helena; great Aunt Ardis Rice of Helena; cousins Cory (Jessie) Lunde, Megan (Devin) Alfson, and Kelsey (Miles) Bell all of Helena, and Leonnie (Tom) Stewart of Washington; lifelong friends Shane Stewart and Brian Broyles; beloved companion Cinch; and numerous extended family and friends. The family request donations be sent to the Lewis and Clark Search and Rescue (PO Box 473, Helena MT 59624) and/or Friends of Beaverhead County Fair (1025 Selway Drive, Dillon MT 59725). There will be a family receiving friends from 4:00 pm to 7:00 pm on Wednesday May 5, 2021 at Anderson Stevenson Wilke Funeral Home 3750 N Montana Ave Helena, MT 59602.  A funeral service will be held on Thursday May 6, 2021 at 11:00 am at Anderson Stevenson Wilke Funeral Home 3750 N Montana Ave Helena, MT 59602 followed directly by a reception held at Jorgenson #39;s Inn & Suites 1714 11th Ave Helena, MT 59601. A Graveside service will be held Saturday May 8, 2021 at 11:00 am at Mountain View Cemetery Dillon, MT 59725 followed by a reception held at Elks Lodge 27 E. Center St Dillon, MT 59725.

The family of Michael James Rice created this Life Tributes page to make it easy to share your memories.

Send flowers to the Rice family.