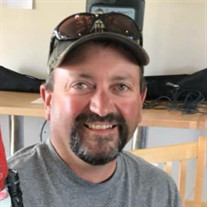 Michael David Marsh passed away on Monday, December 20, 2021. Mike was born in Sheridan, Montana on July 27, 1974 to David and Kassie Marsh. He grew up in Sheridan and graduated from Beaverhead County High School in Dillon in 1993. Mike had the uncanny knack of being able to tear down and rebuild anything with an engine, even at a very young age. Mike worked for the service station in Sheridan throughout high school. After graduation, he went to Wyoming Tech in Laramie, WY and would graduate with a degree in diesel mechanics and business in 1994. After landing a job at Kenworth in Billings, MT, Mike decided his roots were calling him home. He returned to Sheridan and picked right back up with his job at the service station for Andy Verhow. Mike then got a job at the Chevy Dealership in Dillon where he formed a close friendship with Doug Hale. The two opened and ran MD’s Auto Repair until Mike became the head mechanic of the Beaverhead County Road Department, where he worked until his passing. Mike was always eager to lend a helping hand, give back to his community and be a part of his community. He was a member of the Beaverhead Search & Rescue, coached girls fast pitch softball, played in Men’s Golf League, and was a member of the Jaycees from 1995-2012. While a part of the Jaycees he was very active, serving as President in 2001, Rodeo Chairman in 2004, and was awarded the Outstanding Young Man of the Year in 2008. But Mike’s favorite part of the Jaycees was the Demolition Derby where he competed and later judged for many years. It was always the highlight of his summer. The years he did compete, he built his demolition car, and every year it was the same car, the General Lee! In 2017, Mike and his partners in crime built the Engine 18 tailgating firetruck. Several times he reminded his partners that it is easier to loosen the bolts than to cut them off with a torch. As a founding member of the Engine 18 Foundation, he was very proud of the fact that the foundation has provided more that $20,000.00 in scholarships to UM Western student-athletes since 2017. He had the biggest heart and would do anything for his friends and family. Friends were family to him. Mike started dating Brenda Schafer in 2018, and quickly realized she was the love of his life. He knew he hit the jackpot with her when he found out that she too was a Dallas Cowboys fan. The two married on July 4, 2019. He loved sharing his love of outdoors with his wife and kids. Whether it was taking his daughters hunting, going camping with Brenda, going rabbit & gopher hunting with Ashleigh or teaching her how to shoot. He was a true outdoorsman. If an activity included an engine, fishing pole or rifle, he was game for everything. Mike loved to quote his favorite movies and never missed an opportunity to throw in a one-liner or sarcastic zinger! In his spare time, if he wasn’t in the outdoors hunting, camping, or fishing, you would likely find him rebuilding old cars or tinkering in the garage with his best friends, all while enjoying an ice-cold Bud Light! Mike is survived by his wife Brenda, daughters Destiny (Marcus) Howser, Ashleigh Guinnane, Makaila Wolfe, and Shelbie Wolfe, son Chace (Rio) Guinnane, granddaughter Brylee Howser, grandson Flint Howser, parents David and Kassie Marsh, sister Lindsey (Jason) Ericksen, nieces Shaylee and Josee Ericksen, nephew Kristian Landis and numerous aunts, uncles, cousins, and so many friends.  He is preceded in death by grandparents Vernon Marsh, Virginia Nelson, Wayne Nelson, Vera Gilbert, Don Gilbert and childhood best friends, the Day brothers. Services will be on Thursday, December 30, 2021 at 3:00 PM at the Frontier Event Center in Dillon, a reception at the Event Center will immediately follow until 7:00 PM. In lieu of flowers, the family asks that you make a donation to Engine 18 Foundation.

Michael David Marsh passed away on Monday, December 20, 2021. Mike was born in Sheridan, Montana on July 27, 1974 to David and Kassie Marsh. He grew up in Sheridan and graduated from Beaverhead County High School in Dillon in 1993. Mike had... View Obituary & Service Information

The family of Michael David Marsh created this Life Tributes page to make it easy to share your memories.

Send flowers to the Marsh family.