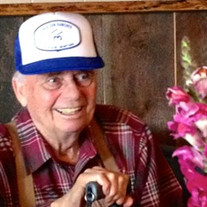 Martin C. Jackson passed away at Parkview Acres Care and Rehabilitation Center on September 9, 2014.  He was born September 3, 1933 in Los Angeles, CA to Noel and Helen Jackson.  They moved back to Montana when Martin was about four. They settled on the family ranch near Jackson. It should be noted that brothers Antoine and Herman Jackson immigrated to the US from Germany and settled in the Jackson area in 1884. Martin is fourth generation descendant from Herman Jackson. Martin was home schooled through the 8th grade. Upon graduation from the 8th grade he attended high school in Dillon, MT and graduated in 1951. He continued working on the ranch. On February 14, 1956, he married his long time girlfriend, LaVerne Henrie. Martin was drafted into the war in June 1956. He returned to the ranch in 1958 where he lived until August 2013, when due to illness, he was unable to continue living on the ranch. Martin enjoyed his life on the ranch. He also enjoyed traveling. He visited all western states during his travels. His favorite place was always British Columbia and Alberta Canada. In his younger years he enjoyed his snow plane. He gave that up for snowmobiles. He and Laverne spent many winter weekends in the mountains of the western Big Hole. He also enjoyed loading up his three daughters and his wife and driving to the high mountain lakes in his old Willy's jeep and fly fishing in the high mountain streams. He loved to play the piano, although he couldn't read a note. He played by ear. When he heard a song he liked he picked away for  hours until he could play it. It was a joy to all around him to listen to him play. Martin and Laverne have three daughters, Yvonne Frick (Peter), Thyral Sevalstad, and Twyla Knight (Jerry), eight grandchildren, Erin Brown (Nigel), Blaine Paddock (Kelli), Jackie Pancheri (Mike), Carl Sevalstad, Stephen Sevalstad, Nathan Sevalstad (Hillary), Zeb Knight and Tate Knight and seven great-grandchildren, Haylee, Waylon and Gwynevere Brown; Isaac and Emily Paddock; Cayden Sevalstad; and Daniel Sevalstad. There is a visitation scheduled for Sunday, September 14th from 7 - 8 PM at Brundage.  Services will be held Monday, September 15, 2014 at 10:00 AM at Brundage Funeral Home. $(document).ready(function(){ });

Martin C. Jackson passed away at Parkview Acres Care and Rehabilitation Center on September 9, 2014.  He was born September 3, 1933 in Los Angeles, CA to Noel and Helen Jackson.  They moved back to Montana when Martin was about four. They settled... View Obituary & Service Information

The family of Martin Christian Jackson created this Life Tributes page to make it easy to share your memories.

Send flowers to the Jackson family.