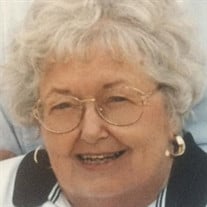 Margaret Isabelle Booth 1929-2015 Margaret Booth, 86, formerly of Salinas, California and recently residing in Dillon, Montana passed away on Sunday, December 6, 2015. Margaret was born in Casper, Wyoming to Hazel and Bryan Hoppe. She grew up in San Francisco and graduated from Lincoln High School and attended San Francisco City College. While living in San Francisco, she met a young Navy man at the USO Club who was stationed at Treasure Island. She and her husband of 61 years, Jack Booth married in San Francisco in 1954 and honeymooned in Carmel – vowing to return to live someday. After a brief stay in Florida, the couple and their newborn son, Tom, returned to California and eventually to the Monterey Peninsula where the family lived for over 40 years. Margaret’s greatest gift to her family and friends was the example she set by her kindness and generosity. She organized neighborhood gatherings and holiday giving for those less fortunate without a want or need for recognition. Margaret was an incredible cook and entertained effortlessly – welcoming all that entered the Booth family home. Her children’s friends were also her family. While she had no grandchildren of her own, Margaret adopted many and was giving to them as well. She was the open door when they were in trouble at home and there to spoil them when the time was right. Margaret was proceeded in death by her Mother and Father, Hazel and Bryan Hoppe and her sister, Georgia Ervin. She is survived by her loving husband, Jack; her son, Tom and his wife Nancy; daughter, Jerri and her husband Rich Champlin; as well as many caring relatives and countless friends. The family would like to express our sincere thanks for all of those physicians, nurses and caregivers that gave so generously for Margaret’s care. Without you, it would have been impossible. An open house will be held at the family home at 187 Freeman Lane in Dillon on Saturday, December 19th from 2pm to 5pm to celebrate Margaret’s life and a celebration of life will be held in Salinas, California in the spring. In lieu of flowers, please donate to the Salvation Army or a pet shelter of your choice in Margaret’s name.

The family of Margaret Isabelle Booth created this Life Tributes page to make it easy to share your memories.

Send flowers to the Booth family.