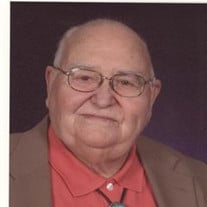 Louis W. (Bill) Hammer, Clinton, MT resident of Rock Creek, died Monday, May 6th at his new home in Dillon, MT. He was in ill health for several years, but God has now called him home. Bill was born June 14th, 1930 in Scranton, N.D. but moved to the Black Hills of S.D. when he was 3 years old. He attended Lead Public Schools graduating in 1948. He was active in all drama and vocal music activities. He attended Black Hills College in Spearfish, S.D. and Augustana College in Sioux Falls, S.D., where he received his Bachelor of Music degree in 1952. At Augustana he met and married the love of his life, Lois Norby. They were happily married for 63 years. Bill was sought after as a soloist, first at Lead High school, through his years at Augustana, and as a student at the University of Colorado. He performed for many community activities and organizations. Bill received his Master of Music Education Degree from the University of Colorado in 1957. One of his professional highlights was singing â€œSouth Pacificâ€ at Red Rocks Amphitheater while attending the University. He taught music in the schools of Smithland, IA, Chamberlain, SD, Worthington, MN and Missoula, MT. His choirs were widely recognized for their excellent quality and professional presentations. He taught music theory and choir at Worthington Community College for his last 11 years in Minnesota. Most of his students still fondly remember him and call him â€œUncle Billâ€. His college groups were sought after to perform for local organizations and toured annually. Additionally, he was a much sought after judge for music contests throughout the state of Minnesota. Bill is recognized as one of the outstanding music directors in Colleges and Universities in America. He also started a very successful community chorus that performed several Gilbert and Sullivan operas as well as more contemporary concerts. In 1979 Bill and Lois moved to Montana, where Bill became active in the Missoula Mendelssohn Club, toured abroad to many European countries performing concerts. After attending and participating in the International Choral Festival in Nancy, France, the Mendelssohn Club was inspired to create the now famous International Choral Festival in Missoula. He delighted in the outdoors, fishing, hunting and all things nature. He was a fierce advocate for the health and protection of his beloved Rock Creek fishery. He served for many years as the chairman of the Rock Creek Protection Association and was successful in providing an improved road for the first 11 miles of Rock Creek. In his later years, Bill became an accomplished lapidarist and reveled in making and sharing hundreds of different items of jewelry by cutting and polishing gem stones. He always enjoyed composing music, writing poetry, tying flies, rock hunting, traveling and of course, fishing his beloved Rock Creek, where he knew every fish by name, as well as other fisheries of the world. He will be missed by his family and friends. He is survived by his wife, Lois Hammer of Rock Creek and Dillon, MT, daughters Joy (Kevin) Miller of Plymouth, MN, Lori (Steve) Laughlin of Spearfish, S.D. and his son Eric Hammer (Sandra McIntyre) of Dillon, MT., his 4 grandchildren, Maren Miller of Rochester, MN, Anna Miller of Plymouth, MN, Colin (Nicole) Laughlin of Denver, CO., and Kyle (Beth) Laughlin of Rapid City, S.D. Services will be held Monday, May 12th at 11 am at St. Paulâ€™s Lutheran Church, 202 Brooks Street, Missoula, MT 59801. Memorials can be given to Dillon Hospice in Dillon, MT, Family Promise of Missoula or a charity that helps the disadvantaged.   $(document).ready(function(){ });

Louis W. (Bill) Hammer, Clinton, MT resident of Rock Creek, died Monday, May 6th at his new home in Dillon, MT. He was in ill health for several years, but God has now called him home. Bill was born June 14th, 1930 in Scranton, N.D. but moved... View Obituary & Service Information

The family of Louis William Hammer created this Life Tributes page to make it easy to share your memories.

Send flowers to the Hammer family.