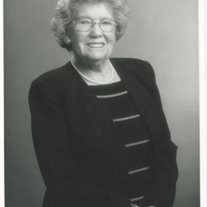 Loretta Eunice Cashmore, 89, of Dillon, MT peacefully passed away on December 31, 2014, surrounded by her family.   Loretta was born to Walter Lee and Roberta (Bean) McDowell in Butte, Montana on July 3, 1925.  Lorettaâ€™s family included her older brother, Dean and younger sister, Aileen (Warrick). The family lived on their homestead in Monida, Montana and in 1937 moved to Dillon.   Loretta graduated from Beaverhead County High School at the age of sixteen. Soon after graduation she applied for and was accepted in the Civil Aeronautics School in Seattle, Washington. She completed her training and returned to Dillon to work as an airport control operator and later transferred to Pocatello, Idaho. Loretta resigned from the CAA and enlisted in the Army Air Corps in April 1945. After completing basic training, she was transferred to Sheppard Field, Texas for control operator training and was promoted from private to corporal. Loretta was then transferred into the 106th Army Airways Communications System headquarters as Special Orders clerk. In April 1946, Loretta was promoted to sergeant and earned the commendation ribbon while serving at the 106th AACS. She was set to transfer to Japan, but instead made the decision to return to civilian life.   Upon returning to Dillon in 1951, Loretta got a job as bookkeeper at Ben Redd Chevrolet. It was here that she met A. Alden â€œBudâ€ Cashmore and in 1952 they married. Together they raised three children, Randy, Loran and Alden in Dillon and called it home for the rest of their lives.  As a bookkeeper, Loretta accepted a position at Vigilante Electric Co-Operative in 1962 and was promoted to Office Manager in 1974; retiring in 1989 after twenty-seven years of service. Loretta continued to support the military by joining the American Legion.  She was an active and dedicated member of American Legion Post 20 for 63 years. Loretta served in the Color Guard, sold Memorial Day poppies to honor the sacrifices of our veterans, and remembered veterans each Memorial Day by placing a flag on their final resting place.  A member of the American Legion Auxiliary for 24 years,  many veterans knew Loretta best for the many military service pillows she made and distributed over the years.  Her loyalty and devotion to our veterans is sewn into each and every pillow. Lorettaâ€™s greatest joy was her family. Her love for her family was unlimited and unconditional. She spent countless hours researching family history to share with others. Loretta was also very outgoing and adventuresome. She held a private pilotâ€™s license, was the Montana State Small Bore Champion in 1954 and drove the Alcan Highway to Alaska four times. She participated for seven years in the annual Chief Joseph Trail Ride, a week-long, one-hundred mile horseback ride. She always enjoyed hunting, fishing, horses and Indian artifacts. Loretta is survived by her sons, Randy M. Scott of Fairbanks, AK and Alden (Aaron) Cashmore of Dillon; daughter Loran (Brian) Bond of Seattle, WA; her grandchildren Lynden Bond of Brooklyn, NY, Taylor Cashmore of Dillon and Matthew Bond of Seattle, WA; sister, Aileen Warrick of Dillon, sister-in-law Dorothianne McDowell of Lind, WA and numerous nieces and nephews. Services will be held at the Brundage Funeral Home on Monday, January 5, 2015 at 10:00 a.m.  A visitation will be held from 5:30-7:00 p.m. Sunday, January 4, 2015.   The family expresses its gratitude to Barrett Home Health and Hospice, whose staff helped make Loretta's passing peaceful and loving, the staff at Renaissance Southside for their wonderful care and kindness, and Dr. Ronald Loge for his many years of excellent and faithful care. Memorial contributions may be made to Beaverhead Co. Animal Shelter, American Legion Post 20 or Barrett Home Health and Hospice.   $(document).ready(function(){ });

The family of Loretta Eunice Cashmore created this Life Tributes page to make it easy to share your memories.

Send flowers to the Cashmore family.