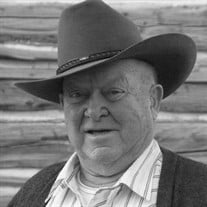 Jay Frederick Nelson was born July 3, 1923 in Butte Mt to Fred and Margaret (Woolaghan) Nelson of the Big Hole Valley. He passed away June 1, 2016 at his home in Jackson surrounded by his loving family. Jay spent all his life in his beloved Big Hole Valley. In 1941 he married Jean Renz of Dillon. In June 1943 he enlisted in the U.S. Army. He served in the 99th Division that fought in the Battle of the Bulge, and was one of the first to cross the Ludendorf Bridge at Remagen, and was wounded by shrapnel on March 13, 1945. In November he was discharged and hitchhiked back to Montana to return to the Big Hole. He and Jean raised six children - Jenny, Ruthie, Sherry, Kathy, Mary, and Bob. They were married for 56 years when she passed away. He built the family home in 1950 in Jackson when his children started school with materials he logged in the Valley using the sawmill on his Dad’s ranch to saw the lumber. He began his building career and did electrical and plumbing work in the Valley and said “There aren't many buildings in this Valley I haven’t put a nail in.” He and his brother Tom built over 50 Beaverslides to be used to put up hay. He also built scale model Beaverslides and donated them to various museums and places where they can be enjoyed by all. He loved haying in the Big Hole and helped hay for over 70 years before giving it up. Jay served on the Jackson School Board, and taught Hunter's Safety to the Valley children for many years. He was on the Vigilante Electric Board for 41 years, helped found the Western Montana G&T in 1980, served as chairman of the local sewer and water board, was a charter member of the Jackson Volunteer Fire Dept, and served 56 years as commander of the Bill Carroll VFW Post 9040. For over 20 years he took his Beaverslide and 2 pole derrick to Bannack to demonstrate how they worked. He loved letting the children do the demonstrating. Jay has written two books about the Big Hole "Scrapbook from the Big Hole" and "Big Hole Memories." A third book "Love and a Prayer” holds the letters he wrote home during WWII. Jay belonged to the VFW that hosted the "Old Timers Day" in Jackson for 50 years, honoring the old timers and settlers. They pit barbequed beef donated by valley ranchers, served on homemade bread from the women in the valley. He was inducted into the Montana Cowboy Hall Of Fame in 2014. Jay taught woodworking to Big Hole kids and enjoyed seeing and hearing of their success. His wooden baskets of which he made over 300 have been shared with friends all over the world. The last one sold at the Fireman’s Ball in Jackson for $250. He shared knowledge of his wartime experience with the Jackson school children. In December of 2015 Robin Baker of Senator Daines Office interviewed him for the Veterans History Project and sent his “Love and a Prayer” book to the Library of Congress. The DVD finally works in his DVD player and we can share it now with all. Jay loved making horseradish and picking gooseberries and taught his family how to do the horseradish which was shared by all or sold at the Family Reunion Auction. Special thanks from the family to Dr. Ron Loge who took exceptional care of Dad and also the Hospice team who were amazing help to us these past few months. Words can never express how wonderful your care made us feel. He was preceded in death by his parents Fred and Margaret, wife Jean, brothers Tom, and Bill, son-in-law Bill Metzger, and Grandson Jordan Rangitsch. He is survived by children Jenny (Virgil) Anderson, Ruthie (Gilbert) Little, Sherry Metzger, Kathy (John) Johnson, Mary Rangitsch, and Bob Nelson; Grandchildren Doug (Sally) Anderson, Laura Smith, Jeff (Jaime) Robinson, Mike Robinson, Brian (Kim) Harrison, Kyle Metzger, Steve (Anner) Johnson, Connie (Jody) Roark, Stacy (David) Parks, Shawn (Antonia) Rangitsch, James (Krista) Rangitsch, Jason (Dawnnele) Rangitsch, and Jessica Batson - and 29 great grandchildren. Services will be held at 10:00am on June 11th 2016 at the Wisdom Masonic Temple with Full Military Rites. Reception will follow at the Wisdom Community Center. Donations may be made to the Jackson Fire Dept, or the Big Hole Valley History Book Organization at box 847 Jackson MT 59736 or the Beaverhead County Museum, 15 S. Montana St., Dillon, MT.

Jay Frederick Nelson was born July 3, 1923 in Butte Mt to Fred and Margaret (Woolaghan) Nelson of the Big Hole Valley. He passed away June 1, 2016 at his home in Jackson surrounded by his loving family. Jay spent all his life in his beloved... View Obituary & Service Information

The family of Jay Frederick Nelson created this Life Tributes page to make it easy to share your memories.

Send flowers to the Nelson family.