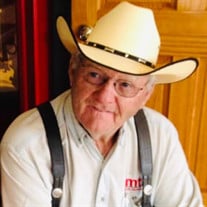 James “Gramps” Tenney   James Wilson Tenney was born in Great Falls MT on July 29th 1936 to parents Jay and Virginia Tenney. He was the first born of four children; Dennis, Marlene, and Jayette. He grew up in Fairfield MT where he participated in track, football and basketball. In 1954, as a Junior, his basketball team went on to win the first State Championship. He was quick to mention he was known as “Swish Tenney”. As a senior he was offered a full ride scholarship to Carroll College to play both football and basketball but realized the cowboy life was more suited for him. After graduation he married his high school sweetheart Ella Mae Herman. While chasing his dream of being a cowboy and his passion to be the best team roper there was, he and Ella Mae would welcome three children together; Vicki, Jennifer and Jason. In 1975, Gramps and Ella Mae would move from Jordan MT to the Dillon area where he worked for the late Frank and Dan Rebish. Gramps continued roping and started working as a truck driver for Roger Cleverley. Gramps then continued his truck driving days with son-in-law Bobby for 20 years. He spent many years making memories and building many friendships through the trucking days. Gramps spent many winters in Wickenburg, Arizona where he got to fulfill his passion for team roping. Whether he was roping or trucking he was surrounded by friends and family. He was a true Greenbay Packers and Duke Blue Devils fan. Many friends, family, children, grandchildren and great grandchildren will all cherish the moments spent with Gramps. Gramps went to spend eternity with his wife Ella Mae on April 18th 2019 in Dillon MT at age 82. He spent his last couple weeks surrounded by close family that loved him. He is preceded in death by his parents Jay and Virginia Tenney, wife Ella Mae Tenney, brother Dennis Tenney and sister Marlene Evans, Great Aunt Hazel Skelton and Son-in-law Bobby Turney. He is survived by his sister Jayette (Russ) Robb, his three children Vicki (Gary) Helm, Jennifer Turney and Jason (Tricia) Tenney, 12 Grand-Children, 20 great Grand-Children and one more expected in August. Services will be held at Brundage Funeral Home in Dillon Mt on Saturday April 27th 11:00 am

James &#8220;Gramps&#8221; Tenney &#65532; James Wilson Tenney was born in Great Falls MT on July 29th 1936 to parents Jay and Virginia Tenney. He was the first born of four children; Dennis, Marlene, and Jayette. He grew up in Fairfield MT... View Obituary & Service Information

The family of James "Gramps" Tenney created this Life Tributes page to make it easy to share your memories.

Send flowers to the Tenney family.