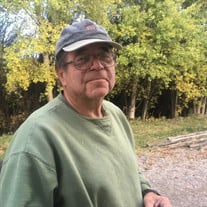 James Martin Lane, 80, of Dillon, MT passed away on November 5, 2021 with his wife Susie by his side. Jim was born on July 5, 1941 in Pomona, California, the oldest of 3 children, to James Marx Lane and Iva Lane. Jim was a graduate of Citrus College in Glendora, California with a degree in automotive repair. He served in the United States Navy aboard the aircraft carrier USS Hancock. After his service he was employed by General Motors at the Smog Emissions Control Laboratory in Van Nuys, California. He was a forerunner and leader in the field of emissions science and served in an executive capacity with GM until his retirement. Jim loved racing motorcycles in his youth and was able to continue this hobby and race buicks while working at GM. He loved Nascar and rarely missed a race. He always had a car he was working on and loved to drive his Model T around town. Jim was an avid cyclist and would often bike for hours in good weather. He adored his cats and dogs and spoiled them all. Jim was a kind friend who loved to spend time with others. He could always be found on Friday nights at the brewery enjoying a beer with his friends. Jim married Carolyn Bland in 1966 and later married Carol Port in 1988. On August 28,1992 Jim married Nancy Nelson. After retirement, Jim and Nancy moved to Dillon, MT. They were married for 19 years when Nancy passed away after a difficult battle with cancer. In 2012, Jim met and began a relationship with Susanne Brown. Jim and Susie were married on October 5, 2017. Jim loved his wife and was loved by all who knew him. He is survived by his wife Susie Brown, step-daughters Freddi (John) Christensen and Joni (John) Neal. He is also survived by his step-son Chad Laird, step-daughters Sally and Holly Laird, from his marriage to Nancy Nelson, and many grandchildren who loved their grandpa very much. He is survived by his brother John (Cheryl) Lane as well as his ex-wife and best friend Carolyn, in addition to many other friends. He is preceded in death by his parents, sister Margaret Elizabeth, and wife Nancy. Graveside services will be held on Friday, November 12, at 3:30 p.m. at Mountain view Cemetery in Dillon. A reception will follow at Beaverhead Brewing Company.

James Martin Lane, 80, of Dillon, MT passed away on November 5, 2021 with his wife Susie by his side. Jim was born on July 5, 1941 in Pomona, California, the oldest of 3 children, to James Marx Lane and Iva Lane. Jim was a graduate of Citrus... View Obituary & Service Information

The family of James M Lane created this Life Tributes page to make it easy to share your memories.

James Martin Lane, 80, of Dillon, MT passed away on November...

Send flowers to the Lane family.