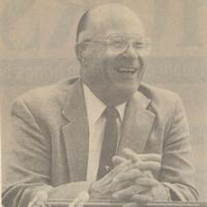 Henry Warren Stish, 89, of Dillon, MT quietly and peacefully passed away at home on Thursday, December 5, 2013, surrounded by family and friends.  He was a beloved father, grandfather, great-grandfather, teacher, professor, fisherman, WWII veteran, bowler, golfer, coach, referee and football fan.  Henry loved outdoor activities, especially golf and fishing.  He made four holes-in-one and took several salmon fishing trips to British Columbia. Henry is survived by his wife of 65 years Patricia (Pat) Ann Lenahan Stish, his daughters Marcia (Dick) McCracken, MaryLou (David) Wilson and Peggy (Mike) Naegele; his grandchildren Brad Naegele, Brendan Naegele, Megan (Burke) Nelson and Ryan (Jenny) McCracken; great-grand-children Danika Nelson, Mckall Nelson, Liam McCracken and Colin McCracken. Henry was born July 13, 1924 in Hibbing, Minnesota. He was the son of Henry and Lola Stish and grew up in Nashwauk, Minnesota, where his father worked in the mining industry and worked the family farm. He attended local schools except for one year when he attended a one-room school in a coal mining camp in North Dakota.  Following graduation from Nashwauk high school in 1942 he attended Bemidji State Teacherâ€™s College until entering military service in May of 1943 when he attended North Texas State Teacherâ€™s College in the Army Specialized Training Program. Henry served in the 103rd Cactus Division; 410th Infantry Battalion, Rifle Company in the European Theatre until November 1945.  After serving his country in WWII, he returned to Bemidji State College and received his Bachelor of Science degree in 1948 in science and physical education. In March of 1948 he married Patricia Ann Lenahan and took off for the mountains of Montana.  He continued his graduate school education at the University of North Dakota and received his Masters of Education degree in school administration in 1954. Henry received three National Science Foundation summer institutes plus a full year 1961-62 institute at the University of North Dakota. Henryâ€™s teaching career spanned six decades and started in St. Ignatius, MT in 1948 where he taught science and PE and his 6-man football team won the Class C State Championship.  In 1951 he moved to Stevensville, MT where he continued teaching, served as principal, then as superintendent and was responsible for oversight of the planning, construction and equipping a new high school building.  In 1962 Henry, Pat and family moved to Dillon, MT where he began his career at Western Montana College.  He was the Dean of Students for 17 years, taught numerous science courses, PE classes, and supervised planning, and construction and equipping of the PE complex, science classroom building, library administration building, Clark & Centennial residence halls as well as other renovation and remodeling projects on campus.  He served as golf coach for 10 years, the Division Chair for math, science and PE, was instrumental in developing the Job Corp and Youth Conservation Corp program. Henry received the Western Montana College Service Award in 1990 and was inducted into the Athletic Hall of Fame in 1992 at Bemidji State College. A memorial service will be held at 11 a.m. Monday, December 16, 2013 at the First Presbyterian Church, Reverend David Andrew officiating.  Reception to follow at the Church. Memorial donations may be made to Beaverhead County Ambulance , the University of Montana â€“ Western Alumni or  the donorâ€™s choice. $(document).ready(function(){ });

The family of Henry W Stish created this Life Tributes page to make it easy to share your memories.

Send flowers to the Stish family.