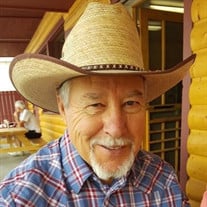 Harold C. Brown, beloved husband, father, grandfather, greatgrandfather and brother passed away peacefully in Dillon, Montana, with his loving wife, Linda by his side. Born in Salt Lake City, Utah, to Lester Blaine Brown and Ella Casper Brown. Harold attended school in Ogden, Utah, and had deep roots in the Ogden and Heber Valley. As a young boy, barely a teenager, he took on odd jobs working at various service stations, Kellerstrauss and other companies, all related to cars and trucks. His hard work ethic began and would last a lifetime. He served his country honorably in the United States Army from 1965 to 1967, earning the National Defense Medal and the Sharpshooter Rifle award. Prior to joining the Army, Harold began his career in the electrical trade becoming a master electrician. Proud member of the IBEW Local 354, he will receive his 55 year membership pin this year. He was a highly respected, admired and well liked brother to his union brothers and sisters, one of them giving him his “Brownie” nick name. His work ethic was strong and his work was meticulous right down to the last wire twist whether for the job or for himself. He was proud of his workmanship. His motto was “too tough for everyone else, just right for me.” He also touted “be American, buy American.” Anyone who knew him knew of his commitment to travel to keep or find a job, always providing for his family. He worked many years on the IPP (Intermountain Power Plant) in Delta, Utah, and most recently prior to his retirement, he worked at Vandenberg Air Force Base in Lompoc, California, on the Atlas V rocket launch pad. As a young boy he and his siblings would travel to the Heber Valley to visit their grandmother, aunts, uncles and cousins. The country lifestyle he never forgot. Fishing with his cousins, putting up hay and other summer past times were some of his favorite memories. As an adult he chased his dream to own land in the valley of his grandmother and built his own gorgeous log home and large barn to house his many vehicles and toys, he had plenty! He loved working on cars and trucks and no matter how old or new, he took impeccable care of them. When he was 15, he took a trip with friends to the Dell, Montana, area where they camped and fished near Sheep Creek. This memory left quite an impression and upon retirement he and Linda began traveling to the Dillon and Dell area, finally finding their piece of heaven on earth, away from the hustle and bustle of the city. This was home. Fishing, traveling the state to see the sights, the wildlife, he was content and at peace, a perfect retirement. He loved the people and their friendliness. Almost daily he would say that this was the happiest he has ever been and couldn't think of any other place he would rather be. He also found great happiness working in his new big barn; he always had a project going and one on the back burner. There wasn't anything he couldn't fix or figure out. Harold was preceded in death by his parents; younger brother, Wayne and former wife. Also preceded in death by his four legged best friend, Freckles. He is survived by his sweetheart of twenty five years, wife, Linda; and his children: son, Brent (Renee); son, Todd; daughters: Kim (Dave), Cathy and Carrie; seven grandchildren and four great-grandchildren. Additionally he is survived by his sisters: Diane and Helen; brothers: Jim and Blaine; countless cousins and best friends, not to forget his very loving and lonely border collies, Elvis and Penny. Cremation has taken place and a celebration of his life will be held in Ogden in the spring with full military honors bestowed upon him. His wishes were to have his remains scattered in his favorite places in Montana that he loved so much. We miss him now, we will miss him forever. He was our hero in life and remains our hero. In lieu of flowers contributions to the charity of your choice. If you would like to contact the family the mailing address is P.O. Box 1256 Dillon, MT 59725

The family of Harold C Brown created this Life Tributes page to make it easy to share your memories.