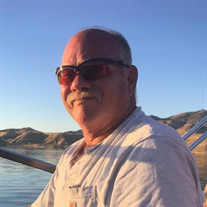 OLSEN II, Fredrick L. (Fred) Passed away August 22, 2021, in Portland, OR. His home, with his wife, is in Wilbur, WA. Fred was born on September 3, 1957, in San Diego, CA to Fredrick and Charlotte Olsen. After high school Fred went to work for Barretts Minerals where he worked for 41 years before retiring in 2017. After retiring he and Jeannie settled in Wilbur, WA. He married Jeannie Riehl on October 8, 1987, in Virginia City, MT. Fred enjoyed the outdoors, boating, camping, hunting, shooting, motorcycles, airplanes, hobby trains, scuba diving and enjoyed cooking for his family. His latest passion was his little red convertible. He was a proud member of the Almira Gun Club and served on the board. Fred was finding a great passion for the sport. Fred is survived by his wife Jeannie at their home in Wilbur, seven children and 15 grandchildren Eric (Lindsey) Olsen and their children Elliot, Henry and Jack; Christy (Pete) Wyborney and their children Sarah Welborn, Lilly, Heather and Ethan; Chad (Tiffany) Olsen and their children Brittanee (Tanner), Jaden (Derek), Trinity and Ronin; Jeremiah (Tristen) Coyne and their children Kalie and Colter; Josh (Devin Kohman) Coyne; Travis Olsen (Ashley Moon) and daughter Jemma; Austin (Jessica) Olsen and daughter Kenzie. Three sisters Pamela (James) Shea, Kristina (Danny) Summers and Jeri (Brian) Davidson along with numerous nieces, nephews, and friends. He is also survived by Griz, his best friend on four legs. He is preceded in death by his parents Fredrick and Charlotte Olsen. A celebration of life will be held at the Brundage Funeral Home, Saturday, September 11 at 1:00. In lieu of flowers donations can be made to the Almira Gun Club, 40184 SR 21 North, Wilbur, WA 99185 or [email protected] Fond expressions of sympathy may be shared at www.strate-funeral.com or www.brundagefuneralhome.com for the Olsen family. STRATE FUNERAL HOME, DAVENPORT, WA and BRUNDAGE FUNERAL HOME, DILLON, MT are caring for the Olsen family.

OLSEN II, Fredrick L. (Fred) Passed away August 22, 2021, in Portland, OR. His home, with his wife, is in Wilbur, WA. Fred was born on September 3, 1957, in San Diego, CA to Fredrick and Charlotte Olsen. After high school Fred went to work... View Obituary & Service Information

The family of Fredrick L Olsen II created this Life Tributes page to make it easy to share your memories.

Send flowers to the Olsen family.