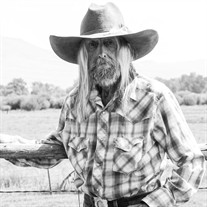 Fred Stewart July 4, 1950-February 7, 2022 Fred Stewart passed February 7, 2022 with his loving wife present at their home. He was born the second son of Dave & Ronnie Stewart in Ogden, Utah on July 4, 1950. Fred was raised on the family dairy farm in Kaysville, Utah. He graduated from Davis High in the spring of 1968. Fred met his lifelong friend and soul mate Wilma Robbins in the summer of 1968. He attended one year of Weber State College in Ogden, Utah. He then joined the air force reserve in July 1969, where he became an aircraft mechanic and served until honorably discharged in 1977. Fred and Wilma married in October 1971. They had their daughter Shasta in March of 1976. In May of 1977 Fred moved his family to Glen, Montana where he began his life’s dream on the family cattle ranch, Bar Seven S. In August of 1978, they added their son Shane to make his family complete. Fred always felt like moving to Montana was like “moving home”. In May 1996 Fred made the difficult decision to work for other ranches to help better the financial prosperity of the family ranch. He worked for Snowline Grazing Association, Raffety Cattle Co., and Vipond Grazing Association. While working outside the family ranch Fred continued his sheep herd that he started with his children in 1984. In 2011 when he returned home full time, his sheep became a family affair with his son, grandson, daughter, and wife with their helping hands. During the years Fred had his “15 minutes of fame” on 3 separate occasions. The first time he was featured in an article in the Butte newspaper. Fred was known as the “Range Rider” which talked about the modern-day cowboy. The second time he was photographed by David Stocklein where he was selected for the front cover of “The Montana Cowboy” book. The third time Fred and Wilma appeared in a commercial for Black Angus Restaurants. In his younger years Fred enjoyed trapping and hunting birds in Utah. Once moving “home” his passion for hunting turned to big game with his son and grandson. Fred felt closest to God with his loyal 4-legged companions, on his horse moving cows in the mountains. Fred was preceded in death by his father Dave, mother Ronnie, brother Jack Stewart and sister Judy Mayfield. He leaves behind his wife of 50 years Wilma, daughter Shasta Stewart, son Shane Stewart, grandson Kaden Stewart, sister Pauline (Tom) Brough Layton, Utah, brother Lyle Stewart, Rob (Ronda) Stewart of Glen, Montana and numerous nieces and nephews. Funeral services will be held on February 16th at 11 AM at Brundage Funeral Home with military burial following at Stewart’s Boot Hill Cemetery in Glen, Montana.

Fred Stewart passed away at home surrounded by his family. Services are pending

Send flowers to the Stewart family.