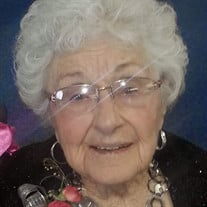 Ellen Margaret Frazee Bernard, 94, entered into the gates of heaven on April 5, 2018 at Pioneer Care and Rehab. She was born on March 30, 1924 to Guy and Irene Frazee in Lemhi, Idaho. She was the 1st born followed by two brothers, Kenneth and Ralph.She met the love of her life, Leon Bernard, at a Christmas dance in Salmon, Idaho. Leon was drafted into the Army soon after a short courtship and they were later married in Denver Colorado. After Leon returned from the war, they lived in Salmon, Idaho where they started their business careers. Later moving to Lima, MT where they purchased the Lima Lumber Yard. After 12 years of marriage they were blessed with a family. The first child, Julie, a son Randy, another daughter Janet, and last but not least Joyce. In 1960, Ellen and Leon built the Holiday Motel and later built a laundry mat. A few years later they built the Drive Inn Cafe, also owning a Trailer Court and Gas Station. Ellen was a very loving and kind lady. She always had a smile on her face and loved to lead children in God's work, whether it was having a Good News Club in her home, where she told flannel graph stories and taught bible song to the kids, or she helped with Vacation Bible School, Awana, had ladies bible study in her home and was one of the cooks at Camp Utmost and Westland Bible Mission camp. Ellen enjoyed her own family, grandchildren and great grandchildren. She loved them all with out measure. She was truly loved and will be missed by all of them. She was a very good cook, liked to crochet, read, garden and enjoyed camping. Ellen is survived by her children: Julie (Ron) Bozeman, Randy (Penny) Lima, Janet (Don) Lima, and Joyce (Brad) Frenchtown. She had 11 grandchildren and 19 great grandchildren. She was proceeded in death by her husband Leon after nearly 62 years of marriage, parents, Guy and Irene Frazee, brothers Kenneth and Ralph, sister in-laws Boots and Joyce Frazee, great granddaughter Tylan Mehn. Cremation has taken place. Memorials may be made to the Lima Community Church or Westland Bible Mission.

Ellen Margaret Frazee Bernard, 94, entered into the gates of heaven on April 5, 2018 at Pioneer Care and Rehab. She was born on March 30, 1924 to Guy and Irene Frazee in Lemhi, Idaho. She was the 1st born followed by two brothers, Kenneth and... View Obituary & Service Information

The family of Ellen M Bernard created this Life Tributes page to make it easy to share your memories.

Ellen Margaret Frazee Bernard, 94, entered into the gates of...

Send flowers to the Bernard family.