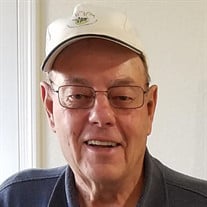 Not sure what to send?

Edwin Stanley Armstrong was born on November 21, 1937, in Bozeman, MT and died on April 24 2022, in Phoenix, AZ. Despite his birth certificate, he often claimed he was born on a ranch near Willow Creek, MT. His childhood was spent in the South Boulder Valley near Cardwell, MT actively helping with the family ranch. Although an only child, he grew up very close to his double first cousins, whom he often considered brothers and sisters. He graduated from Whitehall High School in 1955 and by-passed a football scholarship to join the Air Force later that year. He was trained as a medical technician, and eventually was stationed near London, England. Following his father’s death, he was honorably discharged and returned to the ranch in 1959. He met his wife Eileene St. Onge in Whitehall and they later married on June 29, 1963. They settled in Cardwell, began a family and moved to Dillon in 1968 as Ed was finishing an Education Degree from Western Montana College. While academic report cards from his early years show that schooling was a low priority, his college education was more highly valued. He graduated near the top of his class at Western while commuting from Cardwell and simultaneously continuing ranching and raising a family. After graduation he taught science and history in the Dillon School system for 29 years. During this time, he also coached basketball and baseball. He enjoyed hunting and fishing in his earlier years and golfing throughout his adult life. During their 47 years in Dillon, Ed was active in the St. Rose of Lima Catholic Church serving on the Pastoral Council, Knights of Columbus, and later as a server and Eucharistic Minister at Sunday Masses. He also served as the official scorekeeper for Western football and later for Beaverhead County High School boys’ and girls’ basketball for over 20 years. Following retirement, he and Eileene were frequent travelers with visits to see kids and grandkids, as well as trips abroad. This included a once in a lifetime trip to play a round of golf at St. Andrews in Scotland. He was preceded in death by his wife of 57 years, Eileene (St. Onge) Armstrong who passed away October 5, 2020; his father Edwin Armstrong and his stepfather and mother Rudy and Billie Wegner. He is survived by his 3 children, 7 grandchildren, and 4 great grandchildren including: daughters Jacqueline (Rod) Christiaens and sons, Valier, Jan (Scott) Wright and son, Buckeye, AZ; and son Scott (Sarah) Armstrong and children Albuquerque, NM. Other survivors include stepbrothers and sisters, cousins, and numerous nephews and nieces. A Rosary Vigil service will be held at St. Rose of Lima in Dillon on Friday, May 27 at 7 pm. A Funeral Mass will be held on Saturday, May 28 at 11 am, followed by burial at the Mountain View Cemetery in Dillon. Following the burial there will be a gathering for family and friends at St. Rose of Lima Recreation Center in Dillon. In lieu of flowers, the family requests donations be made to St. Rose of Lima in Dillon or the charity of your choice.

Edwin Stanley Armstrong was born on November 21, 1937, in Bozeman, MT and died on April 24 2022, in Phoenix, AZ. Despite his birth certificate, he often claimed he was born on a ranch near Willow Creek, MT. His childhood was spent in the... View Obituary & Service Information

The family of Edwin Stanley Armstrong created this Life Tributes page to make it easy to share your memories.

Send flowers in honor of Edwin.