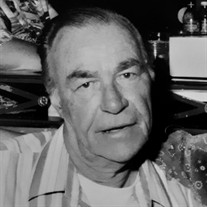 Donald Lee Childers Born June 21, 1934, to George and Winnifred Childers in Glendale, California. Attended and graduated from Benjamin Franklin High School in Highland Park, California in 1952. Joined the navy on October 1, 1952 and served 4 years as an Aviation Ordinance man with Fighter Squadron VF 151 aboard the CVA aircraft carriers USS Boxer, USS Lexington, USS Wasp and USS Kearsarg. Honorably Discharged in 1956 and moved to Santa Cruz, California where he met and later married Helen Christine Hintz. They had 5 children, Daniel Lee Childers, William Edward Childers, Christine Diane Childers Roos, Craig Kenneth Childers, Brian Keith Childers. He was the proud grandfather to Brandon and Jordan Roos and great grandfather to his great granddaughter Jadyn Roos. He worked many jobs during his wonderful days of life and learned many trades. His background included security, Law enforcement, Sales, retail management, truck driving, cabinet making, lumbering, computer analyst, recreation services, and manufacturing services, and recruiting for computer professionals. In 1987 he met and worked with Bernadine Cora Walker and later they were married. In 1996 they purchased two lots on a hillside location in Dillon and built a log home to which retirement dreams were achieved. Don always admired the talent of his wife Bernie as she was instrumental in the construction of their home. Together enjoyed their mountain country life in Montana. Written by Don Childers. Don Childers had written his own obituary several years ago and I am so grateful for this. He did miss a few significant notes that made him so special. His love for life was truly pure. He thoroughly enjoyed meeting people and mostly hearing their stories. A truly caring and thoughtful soul that was always ready to lend a hand to anyone. He valued time with Family and our Golden Retrievers. He had a passion for Volunteering in the community, Camping, Fishing, Wood working, taking Day Trips and Exploring nature. During his retirement years he enjoyed working part-time and loved his Sunday job, as he fondly referred to the Beaverhead County Landfill Estates. He looked forward to meeting old friends and made many new all with a smile, a piece of taffy or biscuit for their dogs. He will be forever remembered and eternally missed by so many. Rest peacefully my love and thank you for choosing me, Bernie.

The family of Donald Lee Childers created this Life Tributes page to make it easy to share your memories.

Send flowers to the Childers family.