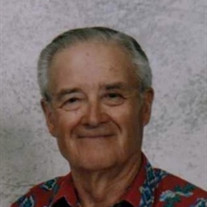 Vaughn DeMar Taylor passed away on November 25, 2014 peacefully at home in Dillon, Montana. He was 96 years old and proud of it. DeMar was born on May 18, 1918 in Afton, Wyoming to Vaughn F. Taylor and Anna Packer Taylor. DeMar was the first-born of seven children. He grew up learning to work on a ranch milking cows, farming, raising cattle and sheep. In 1936, DeMar graduated from Weston High School in Idaho, and then attended Utah State University. In 1937, he served a mission for The Church of Jesus Christ of Latter-day Saints in New Zealand. DeMar married Marie Corbridge on Oct. 2, 1940. They had one daughter, Judy Marie. Sadly, Marie was challenged with poor health and passed away, Sept. 8, 1967. DeMar married Joan Currell on Dec. 14, 1967. With Joanâ€™s children, Craig, Dana, and Kyle, DeMar started fatherhood over again at the age of 49 years old. The family has often said that when DeMar worked, he worked hard, and when he played, he played hard. He was a great entrepreneur and always enjoyed a challenge or a new project. He was very creative in his ideas and problem solving. DeMar was sent to Washington D.C. to lobby before Congress for the Clark Canyon Dam. He was a persuasive speaker and the dam was ultimately built. DeMar enjoyed being a pilot and flying his plane. His experiences are legend with his family and friends. Some of his travels included going to Alaska and Mexico. DeMar served in many positions in the LDS Church. His favorite was as Bishop of the Dillon Ward. He encouraged and financially helped many young men to serve missions. DeMar had a wonderful sense of humor. He was a good sport and able to laugh at himself as much as anyone. Many of his stories have been passed on to his posterity. He was always very generous and shared his â€œtoysâ€ with others. It was important to him that everyone would have a good time. He enjoyed golf, fishing, skiing (until age 84), dancing and playing cards. He loved life and claimed he was able to do everything that he ever wanted to do. DeMar was a man with a great value of family, work, travel and humor. We have learned much from him and his example. We are grateful for his love and loved him very much. DeMar is survived by his loving wife, Joan; his four children, Judy (Steve) Goodsell, Craig (Jackie) Taylor, Dana (Steve) Huffaker, and Kyle (Milonie) Taylor, eleven grandchildren, twenty-four great grandchildren and three great-great grandchildren, brother Paul (Diane) Taylor, sister-in-lawâ€™s Rhea Taylor, Norma Taylor, Loretta Taylor, and numerous nieces and nephews. He is proceeded in death by his parents; wife, Marie; brothers, Keith, Leon and Garth. Sisters; Norma and LaPriele. Funeral services will be Monday, December 1, 2014 at The Church of Jesus Christ of Latter-day Saints in Dillon at 11:30 a.m. Visitation will be at the church at 10:00 a.m. to 11:15 a.m. Interment will be at Mountain View Cemetery. $(document).ready(function(){ });

Vaughn DeMar Taylor passed away on November 25, 2014 peacefully at home in Dillon, Montana. He was 96 years old and proud of it. DeMar was born on May 18, 1918 in Afton, Wyoming to Vaughn F. Taylor and Anna Packer Taylor. DeMar was the first-born... View Obituary & Service Information

The family of DeMar Taylor created this Life Tributes page to make it easy to share your memories.

Send flowers to the Taylor family.