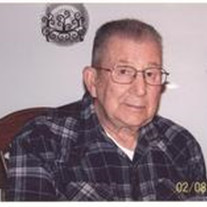 Charles Francis Richardson 86 Charles Francis Richardson was the oldest of 10 children born to Walter and Marie Richardson on February 8, 1927 in Dillon.  He passed Monday, December 9, 2013 with his family by his side. He attended grade school in Bannack; during high school he boarded in Dillon and attended Beaverhead County High School until he was 17.  He enlisted in the Navy and served on the USS Edwards in the Pacific during WW II, as a Gunnerâ€™s Mate Third Class. After the war Charlie returned to Dillon and met his wife of 63 years, Frances Joyce Giudici.  They were married November 26, 1949 in Dillon.  Charles went to work for Brown Oil Company.  Charles and Frances had two children, Don and Carleen.  The Richardsonâ€™s moved to Maiden Rock Mine, where Charlie learned his electrical trade.  While living at Maiden Rock, Charlie enjoyed fishing trips down the Big Hole River and many elk hunting trips with his buddies. In 1964 Charles and Frances purchased the Gambles store in Dillon, but Charlie loved to be outdoors so they sold the store and he opened his own electrical business, Richardson Electric.  He worked hard and built up a business that was well known throughout southwestern Montana. Charlie loved kids and enjoyed taking his grandchildren and great grandchildren fishing and hunting.  He also enjoyed watching them play sports. Charles was proceeded in death by his wife, Frances; his parents; brother, Donald; sister, Janet and sister; Ruth Sinclair. He is survived by his son, Don of Bigfork; daughter, Carleen (Dick) Chaffin of Dillon; grandson Kevin (Christy) Richardson of Whitefish; granddaughter Jessica Mischke of Kalsipell; granddaughter, Jami (Aaron) Bay of Missoula and granddaughter Juli Devlin of Missoula. Charlie is survived by 10 great grandchildren, Dayton and Carson Bay; Bridger and Branson Devlin; Brayden, Abree, Kayla Richardson; Mackenzie, Kadance and Nicole Mischke.   Charlesâ€™ surviving siblings are Heinie Richardson, Norah (Don) Elliott, Jim (Jackie) Richardson, Barbara (Neil) Benson, Patti (Russell) Peterson, Donna (Don) Rude.   He touched the lives of so many nieces and nephews.  He held a special place in his heart for Georgia Owen, his caregiver for the last two years. In lieu of flowers, memorials can be made in Charlieâ€™s name to â€œKids Day on the Big Holeâ€. c/o Big Hole River Foundation, P.O. Box 3894, Butte, MT  59702. Funeral services will be Friday, December 13, 2013 at 1:00 p.m. at the Brundage Funeral Home in Dillon.  Visitation will start at 11:00 a.m. that morning. $(document).ready(function(){ });

The family of Charles Francis Richardson created this Life Tributes page to make it easy to share your memories.

Send flowers to the Richardson family.