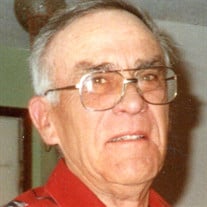 Charles Monte Mort Sept. 30, 1937 - Dec. 16, 2019 “Chuck” as most everyone knew him, passed away early Monday morning at Barrett Hospital, with his wife Shirley at his side. He was born in Blythe, CA to Owen D. Mort and Arvetta May Cate, the youngest of three boys. Chuck married Karyl Lynn Wuench in Blythe in 1965 and they had one son, Charles Mort Jr. They later divorced. He met Shirley Dingley Kimmey in Chino, CA in 1968. They married in 1969 and he became father to her two sons, Mark and Eric. Eric later had his name changed to Mort. Circumstances took them to a number of places, inlcuding Dillon; Cheyenne, WY; Mesa, AZ, Lincoln and Marysville, CA; and back to Montana. Chuck held jobs in a number of fields some of which include; auto mechanic, heavy equipment operator, member of a section crew on the railroad, millwright at Stoltz in Dillon and Feather River Forest Products in Marysville, CA. Returning to Montana he studied to become a locksmith in Bozeman. Chuck and Shirley opened Paradise Locksmith Shop in Dillon in Dec. 1995. He sold the business to D.C. Rentals in 2012. Many will remember Chuck as the man who opened their cars when they locked their keys inside. Chuck was preceded in death by his parents, and brothers George and Owen D. Mort Jr. He is survived by his wife Shirley of Dillon; son Mark and wife Alice of New York, NY; son Eric and wife Olga of Austin, TX; son, Charles Mort Jr. and wife Heidi of McMinnville, OR; grandson Alex Kimmey and great-grandson Winton of Jacksonville, FL; granddaughters Christina and Bethany Mort of WA and OR; granddaughter Kira Mort Wilson of Lethbridge, Canada; granddaughters Kayla and Tasha Mort of Austin, TX. Cremation has taken place and no services are planned at this time. Plans are to do a scattering of ashes sometime in late spring or early summer.

The family of Charles Monte Mort Sr. created this Life Tributes page to make it easy to share your memories.

Send flowers to the Mort family.