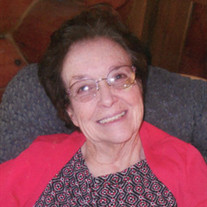 â&#8364;&#339;Candiâ&#8364; Buckingham passed away peacefully in her sleep on September 12th, 2014.  Born Cellus Ruth Carter on February 13th, 1933 in Bluefield, West Virginia to Fred and Hazel Carter, Candi was raised for most of her childhood... View Obituary & Service Information

The family of Cellus "Candi" (Carter) Buckingham created this Life Tributes page to make it easy to share your memories.