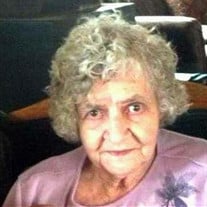 Betty J. Swan of New Sharon, Iowa died August 29, at Renaissance Senior Care in Dillon, Montana, where she has resided for the past six years. Her funeral service will be 11:00 a.m. Thursday, September 3, at the First Presbyterian Church in Dillon, Montana, with Pastor David Andrew officiating and reception to follow. Visitation will be at Brundage Funeral Home on Wednesday, September 2, from 6-8 p.m. Interment will be at a later date in New Sharon, Iowa. Betty was born on July 22, 1928, near Oskaloosa, Iowa, to Robert and Margaret Wilson, the youngest of five children. Betty attended schools in the area, and graduated from Oskaloosa High School. After graduation, she met the love of her life, Hugh Swan and they were married on December 7, 1947. They started their adventure in farming, on the family farm near New Sharon, Iowa. There, they started raising a family. They farmed until 1960, at which time they moved to Barnes City, Iowa, and then to Oregon for a short while. They returned to Oskaloosa, Iowa, where Betty joined the work force in an overall factory. Later, they moved to Barnes City and then to New Sharon, Iowa. While living there, she was employed in Montezuma as foreman at Sig’s Model Airplane Manufacturing, from where she retired in July 1990. Betty enjoyed her life. She had a make do with what you have – fix it, glue it, tape it, nail it, staple it and enjoy your life kind of attitude. She enjoyed sewing, craft projects, gardening, milking the cows and gathering the eggs. Her family was a huge part of her life and she especially loved spending time with them, camping, fishing, being outdoors, taking walks, exploring ghost towns and old homesteads. During retirement, she and her husband enjoyed traveling the country in their mini-home, site seeing and visiting family. She is survived by her daughter and son-in law, Judy and TJ Street of Newton, Iowa, daughter and son-in-law Joyce and Lyle Walker of Dillon and a son and daughter-in-law, Dale and Karen Swan of Port Arthur, Texas. She is also survived by her granddaughter Andrea Walker of Dillon, Montana, grandson Clinton (Nicole) Walker of Great Falls, Montana and granddaughter and son-in-law Ashley and Zachery Orth of Helena, Montana and great grandchildren Tory, Tyler and Jordyn Walker, Cordell and Carson Walker, Whitley and Carter Orth and step-great grandchildren Dillon and Cole DeJean. She is preceded in death by her husband, Hugh Donald Swan; her parents; an infant son, William Hugh Swan; sisters Margaret Scholtus and Ethel Jacobs; and brothers Glen Wilson and Ray Wilson.

Betty J. Swan of New Sharon, Iowa died August 29, at Renaissance Senior Care in Dillon, Montana, where she has resided for the past six years. Her funeral service will be 11:00 a.m. Thursday, September 3, at the First Presbyterian Church in... View Obituary & Service Information

The family of Betty Jean Swan created this Life Tributes page to make it easy to share your memories.

Send flowers to the Swan family.