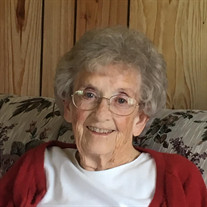 Alice Louise Brown passed away peacefully at her home in Lima, MT on January 2nd 2018. It had been a special week for her and her two sons and two daughters and their spouses and granddaughter Megan. They all got to spend time with her and say their good-byes. Even as she was failing, her concern was for the welfare of her family until the very end. Alice was born on May 11, 1927 at the home of her grandparents Elmer and Addie Martinell on their ranch at Dell, MT. Alice was the 5th child of William D. and Ethel A. Knox. She joined siblings Marie, Ellen (Bessie), Gertie, Carl, and later Anna Jeanne. Alice grew up at her parent’s homestead on Long Creek northeast of Dell. After the kids started school most of the family moved to Dell for the school year. She went to school at the one room schoolhouse in Dell (currently Yesterday’s Café) through the 8th grade. She then attended high school in Lima graduating in 1945. She went on to Montana State Normal School in Dillon graduating with a 2-year degree in education. Alice met the love of her life Jim Brown in Dell June 1939. Her first impression was “He’s a redheaded boy who loves to tease.” They dated through high school and married June 11, 1947. Alice taught 3rd and 4th grades at the Lima school for one year. She was also told she would be coaching the girl’s high school basketball team. She was a little overwhelmed, as she didn’t know much about basketball and had to rely on a lot of help from Jim. Alice and Jim had four children: Kathy, Ron, Russ, and Arleen. They lived in several houses in Lima before building their current home on Harrison Street with the help of their families. Alice and Jim lived there together for over 60 years. Alice continued to live there after Jim passed away in 2012 until February 2017. She lived in Renaissance Assisted Living and then later at Kindred Care and Rehabilitation Center in Dillon. On December 27th, her children moved her back to her home in Lima and all came to take care of her. Alice worked as the Lima school clerk for over 20 years. She also worked at the Post Office and became the Postmaster in 1982, retiring in 1989. Alice was very active in the community. She was a Cub Scout Den Mother, member of the VFW Auxiliary, Lima Community Church Ladies Aid, Eastern Star, and served on the town council from August 1989 – December 1995. She was a very talented seamstress, sewing prom dresses, cheerleading and drill team uniforms, dance costumes, school clothes, doll clothes, down fill jackets, and two granddaughters’ wedding dresses. Alice was the matriarch of her family, and loved to help anyone in need. She was the go-to person when something needed to be done. Alice was preceded in death by her husband Jim, her parents, her in-laws Virgil and Stella Brown, sisters Marie Gibbons, Ellen Fleming, Gertie Gosman; brothers-in-law Dick Gosman and Chuck Brown; sisters-in-law Betty Meeds and Roberta Capell and grandson Mike Clark. She is survived by children Kathy (Mike) Nugent of Kodiak, AK; Ron (Ronda) Brown of Klamath Falls, OR; Russ (Janet) Brown of Billings, MT; Arleen (John) Clark of Lima; brother Carl (Shirley) Knox of Lima; sister Anna Jeanne (Dave) Moss of Lima; sister-in-law Darlene Brown of Lima; brother-in-law Bob (Lana) Brown of San Diego, CA; grandchildren Monte Nugent, Megan Kouremetis, Laura Brown, Jenna Farmer, Erica Brown, Erica Peterson, Emily Peterson, Stacy Clark, Angie Haws, Jenny Kershaw, and Charlie Clark; 17 great grandchildren and numerous nieces and nephews. In lieu of flowers, please donate to BROWN/KNOX Scholarship fund, Lima School, Lima Swimming Pool, Lima fire department, or a charity of your choice.

Alice Louise Brown passed away peacefully at her home in Lima, MT on January 2nd 2018. It had been a special week for her and her two sons and two daughters and their spouses and granddaughter Megan. They all got to spend time with her and... View Obituary & Service Information

The family of Alice Brown created this Life Tributes page to make it easy to share your memories.

Alice Louise Brown passed away peacefully at her home in Lima,...