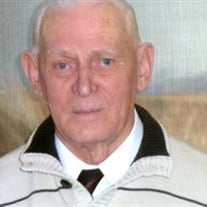 William â€œScottyâ€ Kerr Park passed away at the age of 95 on June 27, 2015 in Dillon, Montana.  He was born to James and Jean Ross Park on May 20, 1920 at Coatbridge, Lanarkshire, Scotland. William married Margaret Graham on February 16, 1940 in Airdrie, Lanarkshire, Scotland.  They later were sealed as a family in the Salt Lake City, Utah L.D.S. Temple.   Meg, his beloved wife, preceded him in death on June 16, 1994.  He was also preceded in death by his parents and 9 siblings. Scotty, as he was known, served in the British Royal Navy during World War II.  He was proud of serving on HMS Victorious, an aircraft carrier, and HMS Scorpion, a destroyer.  He made friends with United States Sailors and was courageous fighting for freedom and enjoyed the comradery. The Park Family immigrated to the U.S. in 1956.  He was a hard worker and dependable all of his life.  The day after he arrived in S.L.C., Utah he found employment.  He had many skills and much strength.  When he retired he was working at Stoltz Lumber Company in Dillon, MT.   Scotty and Meg moved to Montana to be closer to Rab, Megâ€™s brother.  They loved the Big Sky Country and never left.  They enjoyed fishing and the beautiful country drives around the Blacktail; but mostly their loyal Montana friends is what kept them here. Together Scotty and Meg had a tender heart for the elderly.  Several times they were named Volunteer of the Year at the Nursing Home in Dillon.  Scottyâ€™s soft spot for the elderly never departed.  In his nineties he made his family laugh when he would tell them he was going down to visit the â€œold folksâ€ at the nursing home or Assisted Living.  He never saw himself as old and did things that were unbelievable for someone of his age.   Scotty served in many church positions.  His favorite was nursery in the Primary. He loved the â€œwee kiddiesâ€ and they loved him. Scotty still had a heavy Scottish brogue after many years of being in America.  He had a way of teasing that made people smile. He lit up a room with laughter.  The twinkle in his eyes is unforgettable.  His hands were worn with sacrifice for serving others. His heart was pure. He is survived by his two children, daughter Jeanie Clark (husband David) living in Provo, UT, son Thomas Park (wife Debbie) living in Dillon, MT, three grandchildren, two great grandchildren, two great-great grandchildren. We love him and will miss him dearly as will many of his friends. Funeral Services will be held Thursday, 2nd of July, 2015 at the L.D.S. Church in Dillon, MT.  Time 11:00A.M.  A Viewing will be held  one hour prior to services.   $(document).ready(function(){ });

The family of William "Scotty" Kerr Park created this Life Tributes page to make it easy to share your memories.