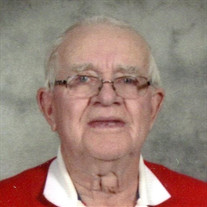 William Dee Eddie was born in Rigby, Idaho on July 7, 1932, and passed on May 9, 2018. Dee was the 4th of 5 children born to James and Myrtle Eddie. As a young man, Dee made his home in Rexburg where he married Nyal Briggs on July 27, 1951. From this union, a daughter, Deanna was born on May 4, 1952. Dee and Nyal later divorced. In 1952, Dee was called to fight in the Korean War. Stories were told about Dee’s days of driving the company Commander around in a Jeep. Upon his return, he made his home in Idaho, where he met Jacqueline Dodd. They were married on July 22, 1956. Dee welcomed Jackie’s daughters, Debbie Jean and Rose Marie, and a family was created. Within the next few years, they went on to have four more children. Robert Leroy (1957), William Lloyd (1958), Shirley Lee (1959) and Jack Dee (1961). William and Shirley were lost shortly after birth and Debbie passed in 1989 after losing a battle with cancer. The Eddies moved to Dillon in 1959, where they worked and raised their children. The family suffered a terrible loss with the death of Jacqueline in 2015. During his younger days, Dee was an avid hunter, fisherman and champion bowler. Many fond family memories were created through these activities. The stories about camping adventures are still being shared decades later. Many may remember being greeted by “Mr. Eddie” as they boarded a big yellow bus. Chances are, if you went to school in Dillon, Dee was your bus driver a time or two! Dee proudly spent 25 plus years driving school bus for Beaverhead County and loved every minute of it. As a mechanical wizard, he also spent several years working at the local car dealerships. Dee is preceded in death by his parents, siblings Evelyn Blakely, Theola Grover and Lloyd Eddie, wife Jacqueline and three children. He is survived by his brother Bobbie (Nada), children Deanna (DeeLynn) Miller, Rose (Dale) Sumner, Robert Eddie, and Jack (Heather) Eddie. Surviving grandchildren are David Miller, Kurt Miller, Rachael Miller Thompson, Dagny (Blaseg) Kleimer, Zachary Blaseg, Hilary Blaseg, Rhianna (Blaseg) Arnett, Benjamin Blaseg, Jeramie Sumner, Jonathan Sumner, Joel Sumner, Daniel Eddie, Devon Eddie, and Taylyr Hoerning. Also surviving are 21 great grandchildren. The family would like to thank several people for their kind and compassionate care as he struggled with the progression of Parkinson’s Disease over the last couple years. We appreciate the help of Tim and Sabrina Nichols, Clyde Hayden, Jack Shallcross and Barrett Hospital’s Hospice program for their comfort and care during the final days. A special thanks to Robert Eddie for providing Dee with around the clock care, comfort and companionship; allowing him to stay in the familiar surroundings of his own home. Services will be held at 10:30 am on May 25th, 2018. Brundage Funeral Home is handling the arrangements and burial will be at Mountain View Cemetery in Dillon. In lieu of flowers, please make a donation to the Barrett Hospital Hospice organization, or the charity of your choice.

The family of William Dee Eddie created this Life Tributes page to make it easy to share your memories.

Send flowers to the Eddie family.