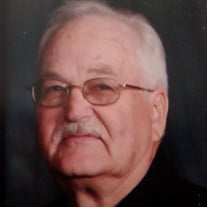 William R. Banning passed away peacefully surrounded by family November 23rd, 2018. Bill was born William Robert Banning on March 6, 1943 in Dillon, Montana to Wallis and Esther Banning. He attended Beaverhead County High School And graduated in 1961 with Honors and Scholarship to Montana Tech to become a Metallurgical Engineer. In June of 1963 he married his high school sweetheart Linda Walker. Their first child Robby was born December 14, 1964 before he graduated with a Bachelor’s of Science in Mineral Dressing. He received two more scholarships while finishing his Bachelor’s degree in Butte, Montana June 5, 1966. May 31, 1967 his second child Nicky was born keeping the household busy between school, work, And children. His professor contacted him 2 years later to offer him a position; teaching undergraduates in his specialty to obtain his Master’s Degree on June 6, 1971; which he received a Who’s Who among colleges and Universities. He went on to have 3 more children Rochelle born December 28, 1973; Renatta born March 3, 1977; Lesli born February 6, 1981; 22 grandchildren; and 11 great grandchildren His Mining Career took him to many different places: Arizona, Colorado, Montana, Washington, Nevada, South Dakota, South Carolina, and then back to Arizona where he retired. Everyone who knew Bill loved him whether they knew him personally or professionally. He was amazing at leading by example especially in a professional setting. Many of the people Who worked for him said he got right in and worked with them and always made them feel like it Was a team effort. He was so humble and didn’t like it when put in the spotlight. When Bill wasn’t working his greatest joy in life was spending time with his grandchildren. Some of the greatest memories the grandchildren have are: Hiking, Fishing, Whitewater rafting, Playing Piano, Playing Banjo; and looking for buried treasure in the backyard with his metal detector. But most of all, his sense of humor. He was cracking jokes making everyone laugh right up to the very End of his life.

The family of William Banning created this Life Tributes page to make it easy to share your memories.

Send flowers to the Banning family.