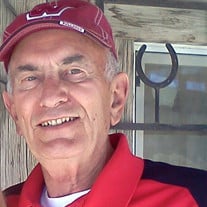 Wayne Henry Contway was born November 20, 1937 in Dillon Montana to Harold “Toke” and Helene Wenger Contway. On Thursday, August 22, 2019, Wayne passed away at home with family at his side after a long battle with cancer. Wayne attended Beaverhead County High School and Western Montana College. After graduating from Western, Wayne began his career with Health and Human Services as a social worker and later became the Beaverhead County Welfare Director, retiring in 1994. Wayne then joined his long time friend, Ed Kenison, as a surveyor for the Beaverhead National Forest. Wayne loved the natural beauty of southwestern Montana. He fished its rivers and streams, hunting its mountain ranges, camped and explored the many lakes in the Big Hole Valley. One of Wayne’s favorite pastimes was bowling, beginning at Ned-Eva Lanes in Dillon 50 years ago, and continuing in Butte with the Thursday Senior Mixed League. Wayne and his wife Karyle Russell of Helena, celebrated their 50th wedding anniversary this year. Wayne is survived by his wife, his son Lee of Missoula, brother Harold “Toke” of Dillon, sister-in-law Margaret (Tom) Colvin, brother-in-law Pat Russell all of Helena, and several cousins, nieces and nephews. Wayne was preceded in death by his mother and father and sister Patsy Bennett. The family wishes to thank Drs. Ron Loge, Meghan Combs, James Hueftle and their staff for their care during Wayne’s 14 year battle with cancer. A special thanks and sincere appreciation to all the wonderful nurses from Barrett Hospital Home Health/Hospice who assisted with Wayne’s care. Cremation has taken place. At Wayne’s request, family graveside services will be held Wednesday, September 4th at 11 am. The family will celebrate Wayne’s life with family and friends at the Dillon Elks Club at 1 pm following the service.

Wayne Henry Contway was born November 20, 1937 in Dillon Montana to Harold &#8220;Toke&#8221; and Helene Wenger Contway. On Thursday, August 22, 2019, Wayne passed away at home with family at his side after a long battle with cancer. Wayne... View Obituary & Service Information

The family of Wayne Henry Contway created this Life Tributes page to make it easy to share your memories.

Send flowers to the Contway family.