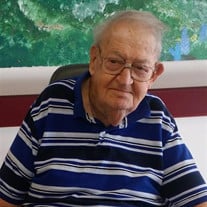 Reverend Warren Paul Smith died on June 10, 2016 at Barrett Hospital and Healthcare in Dillon, Montana. He was 88. He was born on January 21, 1928 in Oak Park, Illinois, the son of Varo Joy and Faye Smith. After a few years in the Chicago area, Warren’s father, a Methodist minister, moved the family back to Kansas. Warren lived and attended schools in several towns in northern and western Kansas, including Gove, where he had the 4th highest grade point average in his class. After he and his three classmates graduated from high school, Warren received his Bachelor’s Degree from Fort Hays State University in Hays, Kansas, and his Master’s Degree from the Iliff School of Theology in Denver. While in college, Warren met and married Jean Johnson from Dodge City, Kansas. During the birth of their son, Barry, Jean died due to complications, and Warren raised Barry with some help of family and friends for about a year while continuing school. A fellow student later introduced Warren to Ruth Marjorie Smith, who was also taking classes at Iliff. Actually, they were re-introduced, because Warren remembered meeting her once years before and thinking even then that there was something unique and special about her. They married on June 11, 1957, and stayed in love and together for almost 60 years. After Warren finished graduate school, they moved to western Kansas where he served a three church rural circuit. In June of 1959, they decided to move to Montana - a state they knew nothing about - to serve another three church circuit, the Hi-Line parish west of Havre, with churches in Hingham, Kremlin and Inverness. Shortly after the move, Marjorie gave birth to their son Geoffrey. Warren went on to serve churches throughout Montana, including Fort Benton-Carter, Glendive-Lindsey, Ronan-Charlo, and Dillon-Bannack. He retired in 1993, but that only made him more available to “fill-the-pulpit” for others. He enjoyed traveling and serving churches throughout southwest Montana including Butte, Whitehall, Melrose and Wisdom. In 1995, the Yellowstone Conference asked if he would serve as an interim Pastor for a year at Grass Range and Winnett in central Montana, and then they asked if he could stay another year. Warren was a rural pastor at heart, and every appointment he served seemed to consist of at least two churches. Sometimes the second church was only seasonal, but they all brought with them their own sense of community. Warren appreciated and respected the differences even a few miles could create between groups of people, but he could also find the themes and values that tied them together. Warren was also a great storyteller, and he was able to find a lesson or a sermon in almost everything he came across. He enjoyed meeting people and if it seemed like he knew someone everywhere he went, it was probably because he did. Warren wasn’t afraid to reach out and make connections with people, eventually finding out he had something or someone in common with them. While travelling in California, the members of the youth group he was with were staying with local church families, and Warren learned that his host family was originally from Kansas. After a lengthy conversation, his host finally called his mother and they learned that she and Warren’s father used to walk to school together. One of Warren’s favorite connections and proudest achievements was that he was able to follow in Brother Van’s footsteps through Montana from Fort Benton to Bannack. Warren loved preaching and leading services in the Bannack Church. He would wear the black coat his own father wore as a “circuit rider” throughout Kansas, and one year Warren and Marjorie won first prize in a costume contest they didn’t even know was taking place. Warren and Marjorie also helped staff many summer youth camps in United Methodist campgrounds at King’s Hill, Luccock Park, Flathead Lake and Camp on the Boulder. For three years while in Fort Benton, Warren developed and ran a week-long wilderness camp at the ghost town of Kendall in the mountains west of Lewistown. Even if Warren wasn’t leading or working at a camp, he did everything he could to get kids there. While living in Glendive, he was forced to ask a colleague to fill the pulpit for him, because Warren “had to” drive some kids all the way across the state to Flathead Lake Camp. His colleague agreed, but for some reason he didn’t feel too sorry for him. Being the son of a rural pastor, travelling was in Warren’s blood from the very start, and he was the consummate “Sunday driver” - in the good way. After church, Warren loved to take the long way home, just to see where a road might go and what could be found along the way. He didn’t mind driving long distances to go to meetings, or to take Marjorie to her meetings. While in western Kansas, he often rode the Union Pacific Railroad into Denver, and this fueled an affection Warren had for trains his entire life. In Montana, he was able to ride the Great Northern across the Highline, and the Northern Pacific from Glendive into Billings. Warren began collecting and constructing an HO model railroad, but every time he was ready to start adding scenery, he would be appointed to a new location, or worse yet, think of a different way to expand and rearrange his layout. Warren owned and operated one of the only railroads in Montana that travelled to all parts of the state without ever being fully connected. This was only one of several pieces of an unfinished, yet very complete life. Warren was preceded in death by his wife Marjorie, his son Barry, his parents, and three sisters, Merle, Dot and Blanche. He is survived by his son Geoffrey of Judith Gap, Montana. There will be a Memorial Service Friday June 24, 2016 at 11:00 am at the Grace United Methodist Church in Dillon, Montana a reception will follow the committal service back at the church.

Reverend Warren Paul Smith died on June 10, 2016 at Barrett Hospital and Healthcare in Dillon, Montana. He was 88. He was born on January 21, 1928 in Oak Park, Illinois, the son of Varo Joy and Faye Smith. After a few years in the Chicago... View Obituary & Service Information

The family of Warren Paul Smith created this Life Tributes page to make it easy to share your memories.

Send flowers to the Smith family.