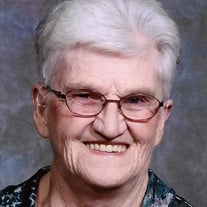 Virginia Ann (Virgie Ann) McCrossin 84 A kind and loving mother, grandmother and great-grandmother, Virginia Ann McCrossin passed away in her sleep April 25, 2018 at her home in Dillon, Montana. Born July 20, 1933 in Hamilton, Montana, she was the only child of Virgil E. and Anna Laura (Vickrey) McCrossin. When she was born her parents wanted to name her Virgie, after her father, but they were told that wasn’t a proper name so she became Virginia. The McCrossin family always called her Virgie Ann. Her childhood was spent in the Bitterroot Valley growing up with uncles and aunts and numerous second cousins but she always said she wished she had a sibling. She learned to play piano primarily by ear and talked often of playing for dances at Charlos Heights. She later owned an organ but if there was a piano anywhere she just sat down and played without music. She often played at nursing homes and more recently for Family Night at the Dillon Elks Club and Beaverhead Senior Citizens Center. In 1950 she married George E. LaFrance and they made their home in Missoula, Montana. While writing this obituary we discovered she fibbed about her age to get married as the license said she was 18 but according to her birthdate she was only 17. She worked as a nurse’s aide for St. Pat’s Hospital and later for various nursing homes. Together they had two children, son, Alan E. LaFrance, and daughter, Linda K. (LaFrance) Meine. They divorced in 1965. She later met Jerry J. Guinard and they married in 1966. They welcomed a daughter, Lisa Ann Guinard, and lived in several towns in western Montana and northern Idaho before settling in Dillon. They divorced in 1984. In addition to her work as an aide at Barrett Hospital and Parkview Acres Nursing Home, she cooked at Bair’s Truck Stop and store clerked for Snappy Service. But her greatest joy came from babysitting her granddaughters and “extras” when she was needed. She later worked in the Grandparent Program for AWARE. She loved playing Pinochle at Beaverhead Senior Citizen Center and bingo at the Dillon Elks Club. Her hobbies were doll collecting, embroidery and crochet. She would enter her handiwork in the Beaverhead County Fair and won a Grand Champion Ribbon last year. For the past several years she sold her pillowcases, dishtowels and aprons at the Dillon Farmers’ Market and area craft fairs. She also gave much of her handiwork to family and friends for special occasions or just to say “thank you.” She was preceded in death by her parents, husbands and her daughter, Lisa. Survivors are her son, Alan, daughter, Linda (Rich), granddaughters, Ashley (Phil) Willett, Tara (Kealy) Beskoon and Cassie (Chris) Brown; great-grandchildren, Gabby Willett, Braiden & Elijah Beskoon and Lily Brown. She is also survived by Aunts Alice McCrossin and Maggie McCrossin and many second cousins. Services will be held at Brundage Funeral Home in Dillon. Visitation will be Thursday, May 3, 2018 from 7 – 8:30 p.m. with Celebration of Life service Friday, May 4, 2018 at 10:00 a.m. A luncheon will follow at Our Saviors Lutheran Church. Graveside Committal Service will be in Hamilton at Riverview Cemetery at 3:00 p.m. Memorials can be made to Beaverhead Senior Citizens PO Box 1142, Dillon MT 59725, Beaverhead Animal Shelter 80 Lagoon Lane, Dillon or to donor’s choice.

Virginia Ann (Virgie Ann) McCrossin 84 A kind and loving mother, grandmother and great-grandmother, Virginia Ann McCrossin passed away in her sleep April 25, 2018 at her home in Dillon, Montana. Born July 20, 1933 in Hamilton, Montana, she was... View Obituary & Service Information

The family of Virginia Ann McCrossin created this Life Tributes page to make it easy to share your memories.

Send flowers to the McCrossin family.