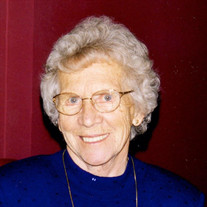 Torborg Haga Hoyland, cherished mother of Katherine Hoyland Barnett and beloved by all who knew her, peacefully passed away on November 8, 2016 at Parkview Nursing Home in Dillon, Montana. She was 100. She was preceded in death by her husband, Gabriel Hoyland of Dillon, Montana and her eight brothers and sisters, including her twin sister, Kari. She is survived by her daughter Katherine of McLean, Virginia, her son-in-law, Colonel Jeffery Barnett, granddaughters Dr. Marit Duffy, MD of Great Falls, Virginia and Major Courtney Barnett of Tucson, three great-grandchildren, plus numerous nephews and nieces in Norway and the United States – and her innumerable friends.Born February 2, 1916, Mrs. Hoyland was raised on a dairy farm near Stavanger, Norway. She completed nurses training in Oslo during the German occupation of Norway in World War II. As a deaconess, Mrs. Hoyland was a formidable presence in her hospital, rising to the position of Chief Surgical Nurse in Halden, Norway. She was introduced to her husband, Gabriel Hoyland of Dillon, Montana by family members while he was visiting his mother in Aalgard, Norway. They married in Alkabo, North Dakota in 1955 and settled in Dillon. Mrs. Hoyland and her husband ran several businesses in Dillon. He led a team of sheep shearers that worked ranches across the western United States; she operated the cook wagon and fed the men. They owned and operated a trailer court on North Montana St. (near the current Big Sky Cinema). Gabe and Torborg also owned a highway construction company in Dillon until his death in 1971. She became a United States citizen in 1961. Mrs. Hoyland was best known for her career as a nurse at Barrett Memorial Hospital. She served thousands of her neighbors in both iterations of Barrett Memorial Hospital before the current facility. She was also well-known as an active member in the local Scandinavian community, the YMCA and Our Savior Lutheran Church. She loved to play pinochle. Until failing health forced her to stop, one of her favorite activities was “bringing food to old people.” Torborg rode her bicycle around Dillon until she was 93; her passport was last used when she was 94. At the time of her death, Torborg still carried a valid drivers license. There are few people in Beaverhead County who have not benefitted from the Norwegian cuisine that flowed from Torborg’s kitchen. Her krumkake and cinnamon rolls during the Christmas season were special treats. The love she generated warmed family tables across Montana. A special thanks to Dr. Ron Loge, Dr. Sandra McIntyre and the staff at Barrett Memorial Hospital. Our warmest and most respectful thanks to the caring professionals at Legacy Assisted Living and Parkview Nursing Home. In lieu of flowers, memorial contributions may be made in her name to the Ron Loge Medical Scholarship Fund (Barrett Hospital Foundation, 600 MT Highway 91 South, Dillon MT 59725), the Southwestern Montana Family YMCA (75 Swenson Way, Dillon MT 59725) or your local church.

Torborg Haga Hoyland, cherished mother of Katherine Hoyland Barnett and beloved by all who knew her, peacefully passed away on November 8, 2016 at Parkview Nursing Home in Dillon, Montana. She was 100. She was preceded in death by her husband,... View Obituary & Service Information

The family of Torborg Haga Hoyland created this Life Tributes page to make it easy to share your memories.

Send flowers to the Hoyland family.