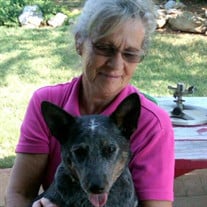 Thea May Barnes Hamar was born December 18, 1943 in Port Orchard, Washington to Clarence and Alta Barnes. She grew up in Olalla, Washington and enjoyed running the barnacled beaches in her bare feet. She played in the woods with her friends and her little brother, Dale. She was a comical person, an avid storyteller, a skilled artist and a delight to anyone who knew her. During her first marriage she entered into a life of motorcycles and four wheel drive clubs such as the Four Wheel Drifters. Weekends were often spent camping in the woods, getting stuck in and out of the mud, sledding in the snow up in the mountains, and playing in the Dewatto swamps. She worked as a retail clerk in the Anita shop in Bremerton, WA. She was a baseball coach for three years in the South Kitsap Western Little League and a trained x-ray technician. Upon her marriage to Reese Hamar, a soldier in the US Army, she fulfilled her lifelong dream to travel the world. She journeyed to places such as Mexico, South Korea, Western Europe, Scotland, Switzerland and almost every state in the US to name a few. While living in Florida she became a taxidermist artist at American Sportsman bringing life to animal mounts with her artistry. She became proficient working with several breeds of animals both foreign and domestic such as deer, elephants, hyenas along with alligators and zebras. Over her entire life she painted various murals on walls for several friends and businesses. She was actively involved in her church and held many positions such as Chaplin’s wife, song leader, Sunday school teacher, youth leader, and Bible study teacher. She was the founder and administrator of the Desert Diggers, a Christian women’s group of encouragement. She was a volunteer at the New Hope pregnancy center in Dillon, Montana. She touched many lives and had a definite impact on anyone who knew her. She is survived by her husband of 34 years, Reese Hamar; daughters, Cammie and Jeanie; grandchildren, Colin, Benjamin, Nathanial, and Megan; brothers Ray and Dale; sisters Rita and Marlene; and many beloved nieces and nephews and their respective families. Friends and family are welcome to join for an informal gathering service on Tuesday 6:30-8:00pm at Assembly of God church located at 104 S California St, Dillon, MT 59725. The funeral service will be held at the Brundage Funeral Home Wednesday May 11th at 10:00 am for any who would like to attend and will be followed by a potluck reception hosted by the Assembly of God Church. Pastors Ryan Spurlock and David Andrew will be officiating the ceremony. The family would like to thank caregivers and hospital staff at Barrett Hospital and Health Clinic for their efforts, care, and dedication. Memorials in memory of Thea will be Ministry to the Military Bishop Robert Moore PO Box 5438 Cleveland, TN 37320.

Thea May Barnes Hamar was born December 18, 1943 in Port Orchard, Washington to Clarence and Alta Barnes. She grew up in Olalla, Washington and enjoyed running the barnacled beaches in her bare feet. She played in the woods with her friends... View Obituary & Service Information

The family of Thea May Hamar created this Life Tributes page to make it easy to share your memories.

Send flowers to the Hamar family.