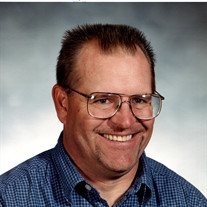 Steven Don Vezina passed away on August 31, 2017 after battling cancer to a draw. Steve was born on April 25, 1959 in Salmon, Idaho to Alvin and Dorothy Vezina. He moved to Dillon at 8 years of age and graduated from Beaverhead County High School in 1977. He enrolled at Montana Tech for a year before deciding teaching was his love and transferred to Western Montana College. He played football and ran track and field for the Bulldogs. As a defensive back, he helped lead the team to a share of the Frontier Conference Championship in 1980. He began student teaching in Belgrade, MT and upon graduation, he accepted his first teaching and coaching position at Baker, MT in 1982. He coached as an assistant in football and track and field, and won the 1986 State Football Championship, as well as coaching 2 individuals to State Wrestling Championships. In the fall of 1987, he moved to Battle Mountain, Nevada, where he met the love of his life, Pattie and they were married on June 11, 1988. While teaching, coaching and raising his family, he coached as an assistant for baseball, softball, wrestling and football. After a year as a wrestling assistant, he took over as the head coach and led the Longhorns to 2 team state championships, as well as 12 individuals to state wrestling championships. He also founded their little guy wrestling program, which helped turn Battle Mountain into a perennial power that has since won 14 more team state championships. In the fall of 1991, Coach Vezina returned to Beaverhead County High School to teach. He began as an assistant coach in football, tennis, wrestling and baseball and later moved from tennis to track and field. He was an assistant for the 1993 Dillon Cubs baseball championship team. As an assistant football coach, Steve was a part of 9 state championship teams. In track and field, he coached 3 individuals to state championships and was a part of the 2016 state track and field boys championship team. In 2017 he retired from teaching and coaching after 35 years. Steve is survived by his wife, Pattie (Dillon, MT), children Tucker (Dillon, MT), Taylor (Dillon, MT), Torrey (Battle Mountain, NV), and grandson Nicholas. His surviving siblings are Bob and Diane Vezina (Dillon, MT), John and Mandy Love (Libby, MT), and Jeff and Kirsten Love (Dillon, MT). He was preceded in death by his father and mother, Alvin and Dorothy, his mother-in-law, Janet Hayes, and his sister and brother-in-law, Linda and Chuck Hoge. GAMEDAY!!! No surrender.

Steven Don Vezina passed away on August 31, 2017 after battling cancer to a draw. Steve was born on April 25, 1959 in Salmon, Idaho to Alvin and Dorothy Vezina. He moved to Dillon at 8 years of age and graduated from Beaverhead County High... View Obituary & Service Information

The family of Steven Don Vezina created this Life Tributes page to make it easy to share your memories.

Send flowers to the Vezina family.