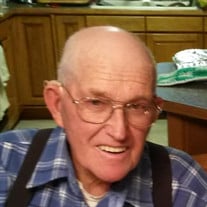 Roscoe passed peacefully at home, December 21st, with his family surrounding him. He was born August 3, 1932 at Barrett hospital in Dillon. He was born to Orrion and Alta (Roscoe) Pilon. He was joined by a brother, Gene, and years later a sister Lora Lee. Roscoe attended Dillon public schools and graduated from BCHS in 1950. While in school he was involved in athletics and FFA. While in FFA, he had opportunity to attend the national convention in Kansas City. Roscoe met Claire, his future wife, in the second grade when she moved to Dillon with her mother from Pittsburgh PA. They dated in High School and were married in 1952, a union that lasted 68 years. To the marriage three children were born. His desire was to have his own ranch, which he worked hard to achieve and enjoyed until his retirement. The couple enjoyed 22 winters in Yuma AZ. In his youth he lived in Argenta with his parents and developed a love for the outdoors, mountain streams and mountain lakes. He passed on his love for the outdoors to his children and spent many weekends, in the mountains with them. Roscoe was a born again Christian, baptized at the waterfall south of Dillon and was an active member of First Baptist Church. When he was a freshman in high school, he drove a stock truck to Idaho Falls to pick up the cinder block for the new church foundation. He was preceded in death by his parents and his brother. He is survived by his wife Claire, children and grandchildren, Becky (Tom) Miller, Melissa (Justin), Michael (Sarah), Kavin (Amber) and Talyn (Toni). Dan (Teresa) Pilon, Tadd, Brian (Shanna), and Rory (Shantel). Jim Pilon, Brent, Travis (Kacey), and Kaden. A sister Lora (Steve) Dougherty, 20 great-grandchildren and numerous nieces and nephews. Visitation is scheduled for Sunday, December 27th from 2 – 4 PM at Brundage Funeral Home with funeral services for family and close friends on Monday, December 28th at 1 PM at the funeral home. A guestbook is available online at www.brundagefuneralhome.com.

Roscoe passed peacefully at home, December 21st, with his family surrounding him. He was born August 3, 1932 at Barrett hospital in Dillon. He was born to Orrion and Alta (Roscoe) Pilon. He was joined by a brother, Gene, and years later a sister... View Obituary & Service Information

The family of Roscoe Orin Pilon created this Life Tributes page to make it easy to share your memories.

Roscoe passed peacefully at home, December 21st, with his family...

Send flowers to the Pilon family.