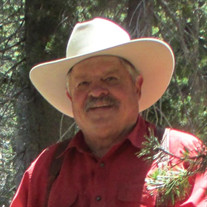 Ronald Hubert McParland April 1, 1944 – June 25 ,2020 Ron was known as an outgoing, friendly and talented man who could do just about anything well. He was an avid bird and game hunter, fisherman, mechanical whiz, and he had an amazing green thumb. He spent his early years working in Agriculture and farming in the San Joaquin Valley of California and later branched out into Retail Hay Sales. A 1966 graduate of Cal Poly, San Luis Obispo in Crop Science, Ron enjoyed the outdoors so much. He was happy planting trees, working in his garden, and selling walnuts that he grew in his orchard. Chris, his wife of almost 54 years, enjoyed exploring and hunting in the Sierras and the Western States with Ron when they weren’t working hard on their family ranch in Clements, CA. Starting with their honeymoon backpacking trip at Bass lake near Yosemite in 1966, Ron and Chris enjoyed countless other horse and mule pack trips together with their kids and friends. Ron loved to cook and was always at home in a 4-star kitchen or behind a campfire stove. In addition to his wife Chris, his two children Brian and Kellie, and his beloved grandchildren, Cade and Hanna McParland, Ron loved his animals. His hunting dogs Hooch, Gus and Lizzie and best mule Albert were some of his closest friends. In 2017 Ron moved to Alder, Montana to fulfill his dream of retirement in the Big Sky Country that he loved so much. Frequently selling walnuts at Farmer’s Markets and Holiday events, Ron fit right in with the kind and relaxed lifestyle that Montana offers. He made new friends there and joined up with old buddies that already lived in Montana. He was having a grand time there doing what he loved. On the quiet summer Montana evening of June 25, 2020, while fishing at Reservoir Lake, Ron suddenly passed away. We can only imagine that God needed the man with the golden gift of gab; a true man’s man, up in Heaven. He will be greatly missed here on Earth, but he was Blessed to live and die doing what he loved. Rest easy Dad and ride on with your good mule through the mountains of Paradise. Ron is survived in death by his wife Christine McParland of Clements, CA, his son Brian McParland and daughter in law Emily of Sheridan, MT and beloved grandchildren Cade and Hanna, daughter Kellie McParland Shields of Clements, CA, and his brothers Larry McParland, Whitehall, MT, David McParland, San Jose, CA and Rick McParland of PA. He is preceded in death by his parents Hubert and Loretta McParland of Merced, California. A private family service will be held later, and a joyful celebration of Ron’s life will be planned. Please no flowers are needed. A scholarship is being developed in Ron’s name and will be announced.

Ronald Hubert McParland April 1, 1944 &#8211; June 25 ,2020 Ron was known as an outgoing, friendly and talented man who could do just about anything well. He was an avid bird and game hunter, fisherman, mechanical whiz, and he had an amazing... View Obituary & Service Information

The family of Ronald Hubert McParland created this Life Tributes page to make it easy to share your memories.

Send flowers to the McParland family.