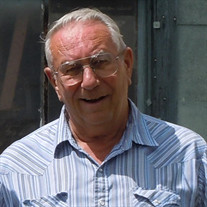 Roger Edward Cochran was born in Idaho Falls, Idaho to Edward Joseph Cochran and Anna (Wickham) Cochran on June 11, 1945. He passed away on April 29, 2016 at Barrett Hospital in Dillon, Montana after a long battle with cancer. He was the oldest of three children and was soon joined by his brother Ronald “Ron” and then by his only sister Barbara (Barb). During his childhood he lived up Big Sheep Creek out of Dell, Montana where he rode sheep to the amusement of his parents and family friends, Mountain Home, Idaho where he and his brother and friends used to chase “horny” toads and in Lima. He attended Lima Public Schools and graduated from Lima High School in 1963. He went on to ISU Vo-Tech to become a transmission mechanic graduating in 1965 and worked for the county road crew. He then went to work at the Anaconda Company Smelter in Great Falls, Montana. On September 14, 1966 he and the love of his life, Linda Sloan were married in Pocatello, Idaho and they spent all most 50 happy and wild years together and to this union they were blessed with two beautiful daughters, Cynthia Diane and Marlynn Renee. He enlisted in the U.S. Air Force on the delayed enlistment program and then reported for duty in March of 1967 in Butte and then to basic training at Lackland AFB in San Antonio, TX. He went on to Chanute AFB in Chanute, IL for Tech School. He was then at Minot AFB at Minot ND for two years before being sent to U’Da Pau AFB, Thailand for a year. He was a certified aircraft mechanic on B-52 Bombers. He was released from active duty on Dec. 18, 1970 with an honorable discharge. Roger worked on ranches, at Ralph’s Exxon and then MDT Maintenance Dept. from where he retired after 35 years of service with credit for 39 years after buying his service years. He was preceded in death by his parents, his oldest daughter Cindy Stone and grandparents and various aunts and uncles. He is survived by his wife Linda, his daughter Marlynn (Chris) Smith of Broadview, MT., son-in-law Troy Stone of Dubois, ID, three granddaughters, Adrienne Cox and fiancée Zack Smith of Elkin, NC, Brandi Stone of Dubois, ID, and Jasmine Hurlbert of Broadview, a grandson, Seth Hurlbert of Broadview and a great-granddaughter Kaycin Bailey (Bailey) of Elkin, NC. He is also survived by his brother Ron (Angela) Cochran and niece Anna of Idaho Fall, ID. Sister Barb (Lou) Bonini of Billings and nephews Joe (Shawna) Bonini and nieces Alexandra, Victoria, Catherine Bonini and George (Julia) Bonini of Seattle, WA. In lieu of flowers donations can be made in his name to the Lima Rural Fire Dept. and Ambulance, Lima Swimming Pool or Beaverhead Stock and Stich 4-H Club c/o Jackie Sutton or a charity of one’s choice. There will be a Celebration of Roger’s Life on Saturday May 7th at 11:30 A.M. at the Community Hall at the Fire Hall in Lima with a luncheon to follow at the Lima School Multi-Purpose Room. The family would like you to bring a story or “payback” to share at the Celebration of Life.

Roger Edward Cochran was born in Idaho Falls, Idaho to Edward Joseph Cochran and Anna (Wickham) Cochran on June 11, 1945. He passed away on April 29, 2016 at Barrett Hospital in Dillon, Montana after a long battle with cancer. He was the oldest... View Obituary & Service Information

The family of Roger Edward Cochran created this Life Tributes page to make it easy to share your memories.

Send flowers to the Cochran family.