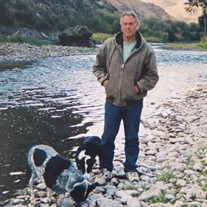 Robert Eugene Weststeyn, age 75 of Melrose, MT was called home to be with the Lord on September 1, 2021 after a lengthy battle with cancer. Robert was born on November 20, 1945 in Modesto, CA and was raised in Ripon, CA. Growing up on the family farm, he and his cousins were often found playing obnoxious pranks and narrowly escaping trouble. He enjoyed hunting pheasants as well as fishing trips with his dad on the Delta. After graduating from Ripon High School, he served in the National Guard before starting his life’s work as a 3rd generation farmer and rancher. Together, he and his wife, Jo Ann, grew peaches, almonds, and grapes. Robert and Jo Ann enjoyed traveling together – they spent Superbowl weekend in Reno every year, traveled to many states including Hawaii and Florida, went to the Caribbean, Panama Canal and even made it to ski on the Swiss Alps with friends. He had a passion for Agriculture and served as one of the founding members of the Ripon FFA Ag Advisory Committee as well as 4-H Barn Chair at the San Joaquin County Fair for many years. In addition to farming, his biggest accomplishment was his children. He was extremely proud of each of them – SO proud that when his son was born, he left his wife at the hospital to go tell the world! He loved to talk (and gossip!), most often telling others about his children’s accomplishments. In his later years he and Jo Ann relocated to Melrose, MT spending time tending to their Longhorn cattle and taking camping trips together. However, his favorite thing was time spent with his children and grandchildren, watching them play sports, show animals or taking them out in the early evenings to look for moose and deer. He loved to end his day with a good bowl of ice cream or popcorn, sometimes both! Robert was preceded in death by his parents Art and Evelyn Weststeyn, his in-laws Earl and Dean Barnes his best friends Dirk Van Noordt and Jon Hoff, and his brother-in-law, Gary Carlson. He is survived by his wife of 44 years, Jo Ann Weststeyn; his children Tami Kuhlman (Scott), Stacey Meneses (Danny), Josh Weststeyn (Olivia) and Jennifer De Jong (Chad); 12 grandchildren, Reese, Weston, Alexis, Kash, Tyge, Colbie, Karli, Dani, Cade, Kassidi, Walter and Whitney; his sisters Dolores Carlson and Carol Madsen (Bob); his brother-in-laws Bob Barnes (DaNiel), Ray Barnes (Ruthie), and Tom Barnes (Cindy); 8 nieces and nephews, numerous cousins and the Lively family that loved him as their own. A memorial celebration will be held on Tuesday, September 7th, 2021 at 11:00am at The Church of the Big Hole in Melrose and streamed live from his Facebook account. Potluck to follow at the Melrose Bar. Robert’s wishes were that in lieu of flowers donations be made to The Church of the Big Hole. PO Box 52 Melrose, MT 59743 Attn: Larry Boksich, Treasurer. His hope was that they could improve the landscape of the church grounds and have a lawn as green and meticulously maintained as his own was. Robert was a good husband, Father and Papa!! He was loved by many and will be missed by all.

Robert Eugene Weststeyn, age 75 of Melrose, MT was called home to be with the Lord on September 1, 2021 after a lengthy battle with cancer. Robert was born on November 20, 1945 in Modesto, CA and was raised in Ripon, CA. Growing up on the family... View Obituary & Service Information

The family of Robert Eugene Weststeyn created this Life Tributes page to make it easy to share your memories.

Send flowers to the Weststeyn family.