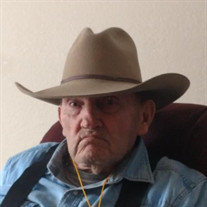 10/13/28 ~ The Long Ride ~ 2/15/2021 Robert Roy Stewart "Cowboy" was born in Darby, Montana to James David and Clare Stewart. His Mother passed away when he was 12. Bob was raised by his grandmother and his dad was a Forest Service Packer. As a 17 year old young man, Bob served in WWII in the Army Air Core. He said they crashed a plane and that was enough. He was part of the Engineers in Guam where they built air strips and bunkers. He said when the bullets would hit the caterpillar, he would get under it until someone would come and say "we got the problem." He was fond of the 20 black men he was in charge of and said they were the best friends he had. Bob was wounded twice serving his country. He was married to Myrtle Elizabeth Casey for 41 years. They cowboyed and lived all over Montana, Idaho, Nevada, Dawson Creek and the Williams Lake area of British Columbia, White Horse in the Yukon Territory and in Alaska, while raising her youngest children, Mary and Kevin. Bob worked for Rob Creek, Spanish Ranch in Nevada, Metlens, Browning (gun mfg) Ranch, Alaska Basin, the P & O, now the Matador. Skelly, Skelton and Buster Brown were among the good cattlemen he talked about. Judy Brown made his day as she remembered Bob on his birthday and brought a cake to the Renaissance where he was living. Bob is survived by his daughter by his daughter Sherri Stewart Herbert and her family, his step children, Mary, Kevin, Beth, Joann, Johnny and Ellen and their families. Bob was especially close to his sister Iris Hubbard and brother Windy Bill Stewart, both of whom proceeded him in death. He was especially close to his nephews Doug Hubbard and Willie Stewart along with his granddaughter Shannon. For the last 15 years before Bob moved in to Renaissance, he considered himself the foreman and lived in his bunk house at Corinne Welborn's place. He, along with his red healer, Dot, kept an eye on the horses and made sure the fences were good. There was not a tougher guy than Bob. He always had a good story and could make you laugh and the girls took really good care of Bob when he was at 4bs and out at the truck stop. When it got difficult for him to drive and take care of himself, he moved in the Renaissance Bunk House, where he loved the love he got there and enjoyed the care he got from the girls at Pioneer Care. Bob was 92 years old at his passing. He had a good ride. He will be buried at the Dillon Legion Plot. Hats off "Forever". Funeral Services will be held February 24th at 2pm at Brundage Funeral Home.

10/13/28 ~ The Long Ride ~ 2/15/2021 Robert Roy Stewart "Cowboy" was born in Darby, Montana to James David and Clare Stewart. His Mother passed away when he was 12. Bob was raised by his grandmother and his dad was a... View Obituary & Service Information

The family of "Bitterroot Bob" created this Life Tributes page to make it easy to share your memories.

Send flowers to the Stewart family.