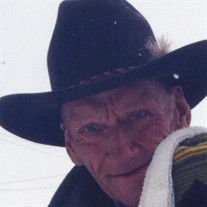 Robert L. Olson (Cowboy Bob) age 70 of Dillon, MT, passed away April 10, 2016 at Parkview Acres Convalescent Center. He was born on September 11, 1945 in Shelby, Montana. Graduating from Shelby High School in 1964. Bob had played in the East West Shrine game. Bob was a strong man, a Cowboy through and through he worked several cattle ranches, did some mining too. A little ornery and not afraid to fight. There wasn’t a single thing he wouldn’t do to help someone. His heart lie with horses, cattle and kids. Although he had none of his own, he shined the most women when there were kids around. He always had stock in candy, popsicles and any other kind of treats. He loved to push them in the swings, stroll them around the block and if they were old enough take them fishing or to a rodeo or two. Bob is preceded in death by his father Orbin Olson, brother Orlean and sister, Delores. He is survived by mother, Gladys Nybert, and sister, Gloria Keller, brother, Gary Olson and several nieces and nephews. He will be greatly missed by his little sidekicks, David, Blazer, Brazen, Tyr, Talon, Emera and Salem, Klaus (Woody), and Christopher and all kids on the block. There will be a gathering for family and friends at 532 Barnett St. on Tuesday April 26th at 2 PM when Bob arrives home on horseback.

The family of Robert Olson created this Life Tributes page to make it easy to share your memories.

Send flowers to the Olson family.