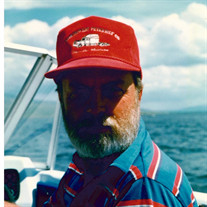 Robert “Bob” McWilliams passed away peacefully on December 9, 2016 at the age of 61, following a long battle with cancer. He was born December 4, 1955 in West Chester, PA to Robert J. and Ethel M. (Hays) McWilliams. At age 14 he and his family moved to Dillon where he graduated from Beaverhead County High School. Shortly after High School he married Sharon Vanover and started working in the oil field for Geo Source, moving around the Western states. They welcomed two wonderful children to their lives and moved back to Dillon to raise their family. Bob worked for the County for 25 years and moved to Helena to work for DEQ before he retired. Bob was a devoted and loving father and husband. He met friends wherever he went. He was an admirable mentor and offered guidance and support to each friend and family member. He enjoyed hunting and fishing and spending time with his family. He taught many to water ski and he helped everyone he could find that perfect deer or elk to shoot. He taught where to use that spinner for that playful fish and was willing to get his feet wet to unhook you from the willows and find a new fishing hole. If Bob was giving you a hard time, you knew you would always hold a place in his heart. He is survived by his loving wife Sharon, daughter Shannon , son Travis, four grandchildren; Brandon, Sarah, Kathryn and Payton, and by his two sisters. He was preceded in death by his parents and one sister. A Celebration of Life will be held on Saturday, December 17th at 1:00 pm at the 4-H building at the Beaverhead County Fairgrounds. Contributions may be given in Bob’s memory to the donor’s charity of choice.

The family of Robert John McWilliams created this Life Tributes page to make it easy to share your memories.

Send flowers to the McWilliams family.