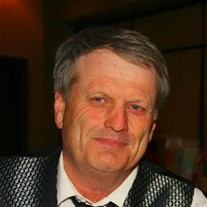 Robert Ross Iverson passed away on May 5, 2016 at the age of 63 in Sidney, Montana. Rob was born in Butte, MT on January 30, 1953 to Kenneth and Elizabeth “Swede” Iverson and joined two brothers, Jim and Paul. Rob spent his younger years in Missoula where he and his brothers, Paul and Jim, spent their time playing baseball, football, basketball and working on, driving and sometimes wrecking various go-carts and motorcycles. His mother passed away when he was 12. His father then married Viola Sweeney and they moved to Lima to ranch. Rob was a reluctant country boy until he started working for his dad and became a competent ranch hand. He attended Lima High School where he excelled in basketball. After attending Western Montana College for a time, he went to work for the Beaverhead County Road Department. In 1980, Rob married Betty Tash and they had two children, Anna and Jake. They later divorced. In the early 90’s he realized his dream and started his own business, Iverson Construction, and did what he did best, operating heavy equipment. He spent many summers fighting fires around the state with his water truck. The last few years were spent working at the Bakkan oil fields. He was happiest when he was working and was very good at what he did. When he was a boy, he helped his family build a cabin on Flathead Lake and he enjoyed spending family time there every summer. Rob loved to hunt and getting ready for hunting camp was a big production every year. He was very proud of his children and loved watching them participate in their various school activities, especially Jake’s football and basketball games. Rob is survived by his children Anna (Mark) Buckner of Helena and Jake Iverson of Billings, brothers Paul (Diane) Iverson of Polson and Jim Iverson of Missoula, step-mother, Viola Iverson of Dillon, step-sisters Sandy (Ross) Hansen of Dell and Nancy Glover of Brooklyn, NY, and numerous cousins, nieces and nephews. He was preceded in death by his mother Elizabeth, father Kenneth and cousin Tom Bramlette. Services will be held on Friday, May 13, 2016 at 5:30 at Brundage Funeral Home in Dillon. In lieu of flowers memorials can be made to the organization of the donor’s choice. A reception will follow services at Our Savior’s Lutheran Church in Dillon, MT.

The family of Robert Ross Iverson created this Life Tributes page to make it easy to share your memories.

Send flowers to the Iverson family.