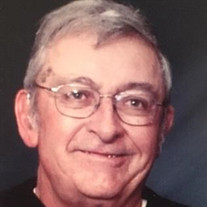 Robert Philip Cottom Bob passed away suddenly on July 29, 2018 at Barrett Hospital of natural causes. Bob was born February 28, 1942 in Butte Montana to Philip and Ruth Cottom. Ruth passed away shortly after his birth. He was raised by Philip and his step-mother Velma in Dillon. After graduating from Beaverhead County High School in 1960, Bob met the love of his life, Barbara, in 1961. They were married on March 17, 1962 at the Presbyterian church in Dillon. Bob and Barb spent the first 3 years of the married life in Great Falls. Bob worked as an orderly at the Deaconess Hospital and the Red Cross Blood Center. They moved back to Dillon in March 1965 for Bob to start work for Irvine-Cottom Seed Potatoes. In November of 1965, their son, Brad, was born. Their family was complete when Brenda was born in 1967. Bob went to work for the City of Dillon in August 1976. He worked in the Water Department for 34 years, retiring as the Water Commissioner in 2010. In his career with the city, he was appointed by Governor Stan Stevens to serve on the State Rural Water Certification Board, where he served 3 terms. In 1994 Bob was awarded Water Operator of the Year for the State of Montana by Conrad Burns. Bob’s biggest regret was not being able to serve his country; being denied as 4-F due to his hearing loss. Bob’s greatest joy was his family. Nothing was more important to him than his beloved wife, Barb, and his grandchildren. Bob was proceeded in death by his parents and step-brother, Chuck (Marge) Crookshanks. Bob is survived by his wife of 56 years, Barbara; son, Brad (Sheila); daughter Brenda Greenwell (Merl); grand children Kristen, Kevin, and Karli Cottom and Rachael and Mitchell Greenwell; brother, Bill (Dixie) Cottom, brother-in-law, Walt (Helen) Morris; and numerous nieces and nephews. Our Bob, Dad, and Papa will be so missed. Private family services will take place at a later date.

Robert Philip Cottom Bob passed away suddenly on July 29, 2018 at Barrett Hospital of natural causes. Bob was born February 28, 1942 in Butte Montana to Philip and Ruth Cottom. Ruth passed away shortly after his birth. He was raised by Philip... View Obituary & Service Information

The family of Robert Philip Cottom created this Life Tributes page to make it easy to share your memories.

Send flowers to the Cottom family.