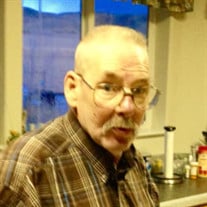 ROBERT (Bobby) F. BEYERS 9/18/1959 TO 4/15/2016 Robert (Bobby) Beyers passed away suddenly in his home on April 15, 2016. Bobby was the 2nd child born to Lorraine Redmond Beyers and Robert Beyers in Dillon MT. Bobby was born September 18, 1959 just 12 days before his dad’s birthday, if you knew Bob Sr. then you knew Bob Jr. He grew up in Dillon and after high school he enlisted in the Navy. Upon returning to Dillon after his enlistment he worked various jobs around the Dillon area. Driving truck for Twig Carlen, Bill Pierce and others. He decided that truck driving was his passion and he was good at it. He then hauled dynamite & nitro which take some experience; he also worked for Montana Brand. Bobby loved trucking and that led to his next big adventure, log trucks and he loved them. If there was anything Bobby loved more than driving a truck, it was being in the mountains… so a log truck was the perfect job for him. You absolutely couldn’t take a ride with Bob in a car without him saying “I hauled logs out there.” and there was always a story about all the places he had hauled logs in Montana and all the places he had been with his truck. He was known as TreeTruckingBob on Facebook. Bobby was also a previous member of the Toston Volunteer Fire Dept. Bobby had some health issues in 2014 that forced him to stop driving a truck, and in 2015 he had open heart surgery. He was disappointed that he couldn’t drive anymore but Bobby was the one that told the doctor that he understood that he couldn’t take a chance on hurting some else if he had another heart attack or stroke. We just didn’t know that it would be so soon. Bobby was preceded in death by his mother and father & paternal grandparents Frank & Lois Beyers and Clara & Clinton Connor. Bobby is survived by his sisters Debbie (Bill) Pierce of Dillon & Audrey (Glen) Davis of Helena, Aunts Carol (Doug) Heavner & Bryl (Terry) Newman. Niece Airlynn (Jake) Taylor, Kambria & Pierce, nephews Colter & Garret Pierce, Brady (Peggy) Beyers & Mercedes Jo. Cousins Dustin Newman, Anissa Skidmore, and Terry (Carol) Dagnais. Cremation has taken place a memorial will take place at a later date.

The family of Robert Frank Beyers created this Life Tributes page to make it easy to share your memories.

Send flowers to the Beyers family.