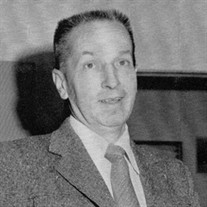 Robert Mitchell Banks, affectionately known as Bob or Mr. Banks, 84, passed away peacefully on Saturday April 5th 2014 at 2.34 p.m. in Dillon Montana at the Renaissance Senior Care Center after a three year battle with Alzheimer's disease. Bob was born on July 13, 1929 in Dillon Montana at the Barrett Memorial Hospital to Charles Henry Banks and Frances Regina Banks (Barber). Bob attended Grade School and graduated Dillon High School in 1949, and was the President of his freshman class. He was active in football, basketball, track, and also worked at McCracken Bros. clothing store.  An outdoor enthusiast Bob spent much of his free time camping, fishing, and hunting in Western Montana with friends and family. Bob then served in the United States Navy from 1949 to 1953 as a Yeoman on a submarine tender during the Korean conflict. On May 2, 1953 he married the love of his life Carolyn Frances Combs in Ennis Montana. Bob earned a B.S. in Education with a Major in Industrial Arts and Minors in Math and Social Studies in 1957 and a M.S. degree in School Administration in 1961 from Western Montana College Dillon Montana.  After a short stint as acting principle and 7th and 8th grade teacher in Cobalt Idaho (1957-1959), and as a Jr. High math and science teacher in Santa Maria California (1959-1960), he and his family moved to Salmon Idaho where Bob served as Superintendent of Schools until 1977, then moving to Frenchtown Montana and serving as Superintendent of the Frenchtown School District until his retirement. After retirement Bob and Carol moved back to Dillon where they spent their summers, and traveled the southern United States during the winters. Bob was an avid outdoorsman and had a particular love of backpacking, camping and fly fishing, trying his luck in the high mountain lakes in the Bitterroot, Gallatin, and Ruby Ranges, or along the rivers and streams in Madison County and Yellowstone Park, as well as Salmon Fishing in Washington State. Bob is survived by his son Charles Banks, daughter-in-law, Lisa and grandson, Joseph of Topsham Maine. Bob was preceded in death by his wife Carol, his brother Norman, and his parents Charles and Frances. Bob's ashes will be spread with his wife's overlooking the Madison Valley near Ennis Montana in a private ceremony. $(document).ready(function(){ });

The family of Robert Mitchell Banks created this Life Tributes page to make it easy to share your memories.

Send flowers to the Banks family.