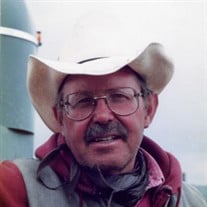 Ricky Joe “Rick” Kuntz was born February 25, 1950 in Billings, Mont. The believer in a loving and merciful God, Rick left this earth on April, 29 2022 after a 17 year long battle with Parkinson ’s disease. The second child born to Edwin and Margaret “Peg” Kuntz, Rick grew up on the family farm 5 miles west of Custer Montana alongside older sister Belva and younger brother Cody. Life as a farmer’s son in small town Montana was the life of dreams. There was always water to change, rattle snakes to kill, grain to shock and cattle to feed. Rick was a standout athlete at Custer High School and always looked backed with pride on this glory days in Custer. After being elected Montana FFA State President in 1968, Rick went on to attend Montana State University where ultimately, it could be argued, he majored in rodeo and beer drinking. Graduating with a degree in Agriculture Education, it was not the classroom, but rather the banking industry that Rick started a career in. Rick found a home as an ag lender and enjoyed crunching numbers and helping producers in a financial capacity. He married Jan Edwards in 1973. The couple had two children, Hilary Dawn, born in 1979 and Alissa (Liz) Mikal, born in 1982. Rick and Jan later divorced. Rick married Gail Shaffner, the red headed daughter of the town veterinarian in 1987. After a short stint in Conrad while Rick wrapped up his banking career, the couple moved home to Gail’s family ranch on the lower Grasshopper just south of Dillon in 1988. From the day he moved to the ranch until the day Parkinson’s disease got the better of him, Rick loved every minute of being a cowboy. Rick and Gail welcomed two more children into their lives, Morgan Calla born in 1992 and Jace Cooper born in 1996. While Rick certainly loved the ranching way of life, a part of his heart was always set aside for sports. Rick enjoyed being a basketball referee for many years in the Big Sky Conference and forever counted his “referee buddies” as some of his most cherished friends. His passion for officiating continued on at the national level where he served on the board for the National Association of Sports Officials. Without a doubt, Rick’s favorite sport was baseball and his brain was nothing short of a steel trap when it came to baseball trivia. He greatly enjoyed getting to “swap” trivia facts with his son Jace- although 9 times out of 10, Rick would always end up stumping Jace. They say the meaning of life is to find your gift and the purpose of life is to give it away. Well, Rick’s gift was his ability to perform cowboy poetry. Rick’s command of the English language, his stage presence and his impeccable memorization skills made him a dynamic performer that wowed audiences. His rendition of poems like “The Bra” or “Snowville” always brought laughter to a crowd while his candid performances of his own authored poems gave audiences an audio-visual experience they would not soon forget. Rick’s poetry talent will forever remain a treasure to those who got to see him perform. A lifelong member of the Montana Stock Growers Association and former member of the organization’s Board of Directors, Rick was a cattlemen who enjoyed every moment he spent a horse back, riding his favored Morgan geldings- Little Jake or Patches, while a faithful blue heeler dog trotted at his side. Rick is preceded in death by his father Edwin, his mother Peg, Father-in-Law, Dr. Don Shaffner, Mother-in-Law Helen Shaffner, nephew Will Arvik and grandson Burke Mellem. He is survived by his wife Gail, his sister Belva (Harold) Arvik of Hysham, brother Cody (Susan) Kuntz of Custer, daughter’s Hilary Biggerstaff and her two sons, Wyatt and Cole of Bozeman, Liz (Ryan) Mellem and their three children Beckett, Rook and Keaton of Missoula, Morgan Kuntz of Dillon and his son Jace (Grace) Kuntz of Lafayette, Indiana. As well as numerous nieces, nephews and friends Rick has always counted as family. The family would like to extend a sincere thank you to the staff at the Renaissance and all the doctors and nurses at Barrett Memorial Hospital for the amazing care they offered Rick in his final months. Donations in Rick’s memory can be made to the Montana FFA Foundation. If you wish to donate locally, please consider giving to the Beaverhead County 4-H to help them build their new 4-H building or to the new Beaverhead County High School baseball team. Rick’s Funeral will be held on May 24th, 2022 at 1:30 pm at the Brundage Funeral Home in Dillon.

The family of Ricky "Rick" Joe Kuntz created this Life Tributes page to make it easy to share your memories.

Send flowers to the Kuntz family.